I recently converted and painted my own Ice Gremlins to use for the Frozen Horror expansion. It's a GW Goblin with added icy boulder, ice-shard weapon and blue-green skin tone, all designed to add a frosty feel to the icy little bugger.
The icycle weapon was just a piece of clear plastic sliced into a triangle and then lightly scored to give the appearance of depth. 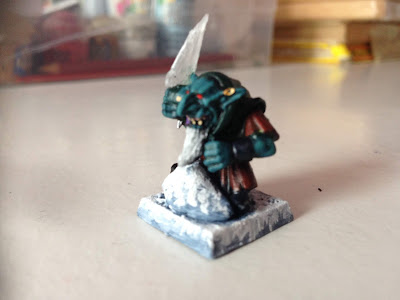 There will be three gremlins in total, but the other two are yet to receive paint.
Not a great first photo but I'll be adding a few more soon a long with my other alternative models that I use for the expansions.


Update, two more sneaky gremlins added to the roster, and some of the other monsters that I'm planning to use for the Frozen Horror quest pack.; two Polar Warbears and a Yeti. The Frozen Horror itself is going to be a bit of surprise that will have to wait until I round to playing the quests..... 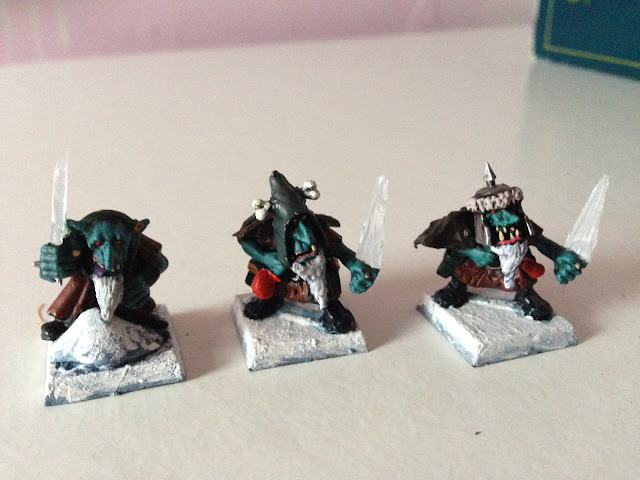 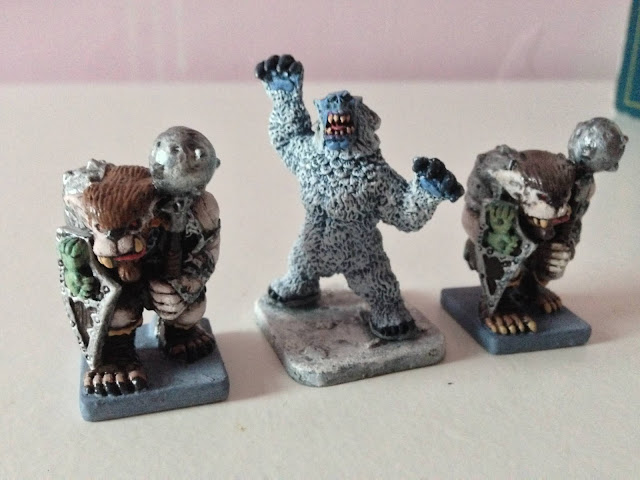 I picked up these two werewolves from my local hobby shop. They are Deepcuts models, and I think they are really useful for the Mage of the Mirror (The Elf quest pack). I've placed a hapless mercenary between the two monsters to give a size comparison. I plan to use the smaller werewolf on the left for when small heroes such as the Dwarf are affected by the curse, and the one on the right for large Heroes such as the Barbarian. 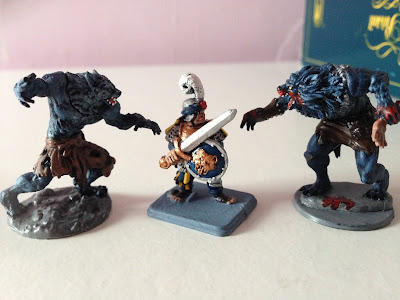 The Witch Lord cometh!!!! Shown facing Mentor himself, these wonderful figures were specially commissioned by the Italian collector Lestodante. There was also a 3rd model for Sir Ragnar, depicted in chains and perfect for the Rescue of Sir Ragnar quest. Fun fact; in the Italian version of Heroquest Sir Ragnar was renamed Sir Manfred. 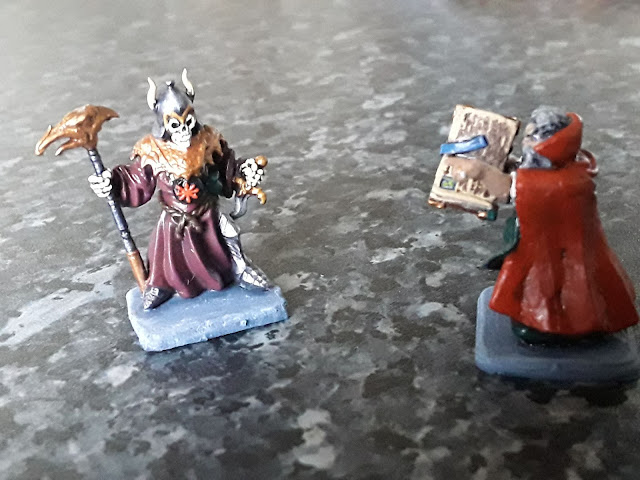 These fellows would make for interesting additions for the Expansion quest. I plan to use the one on the left as an alternative Dwarf Hero for Kellar's Keep, seeing as he has updated weapons from the original Hero. The other one I might use as one of the many NPC characters that are scattered about the official and non-official quests.
They came from one of the first set of plastic miniatures released by Citadel, 'Warhammer Fantasy Regiments Boxed Set'; It featured a sprue with 6 bodies (Elf, Dark Elf, Orc, Goblin, Dwarf and Skaven) and 12 heads (2 for each race) that you could assemble to create your own models. 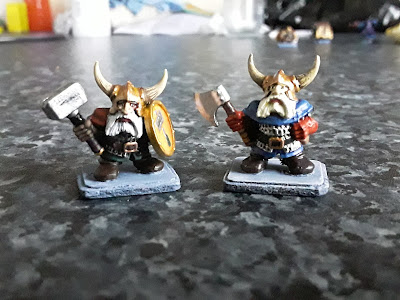 Here's a close up of my favourite of the two; 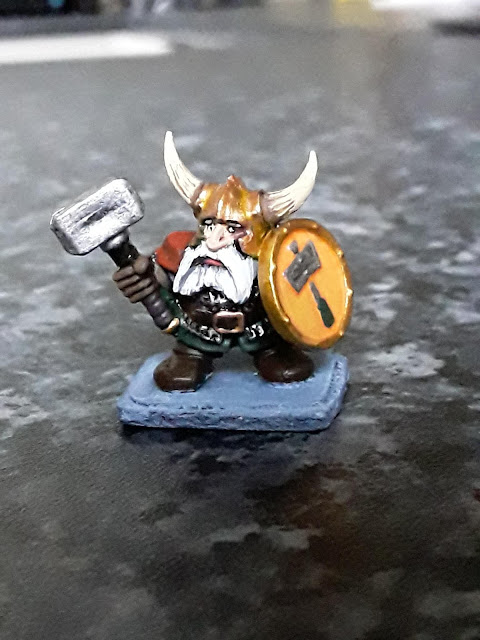 I've also been working on two versions for the female Elf Hero from the Elf Quest Pack. The official model is now hideously expensive, and IMO not that great a figure anyway, so I'll use these instead. First up I have a more sorcery orientated version, focusing on the strong magical feel of this expansion and the powerful new Elf spells. The model is by Deep Cuts. 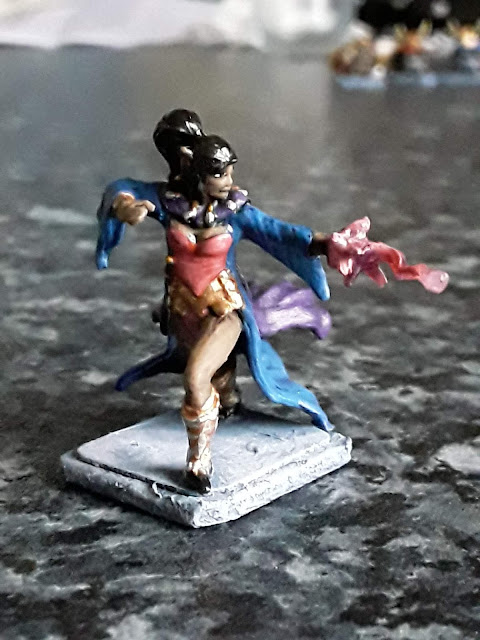 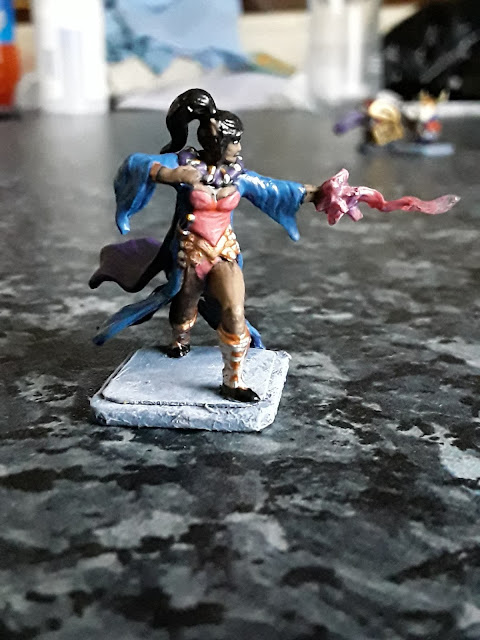 My second female elf model will emphasize the more martial element of the game.

Edit; and here she is; 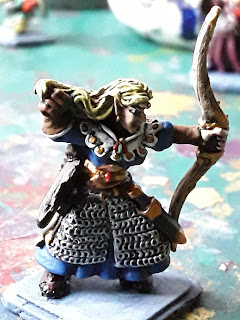 A model of two halves; metal torso (with some sculpting) and a plastic dark elf lower half. Plastic quiver added from a third (unknown) model. 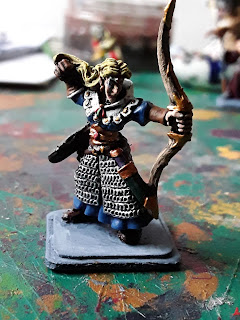 A couple of better pics of Witchy (great model sculpted by Fabio Rizzo, commissioned especially for Heroquest by Lestodante); 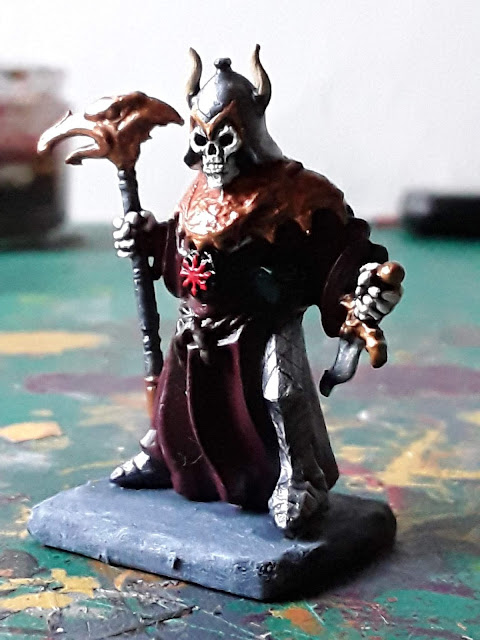 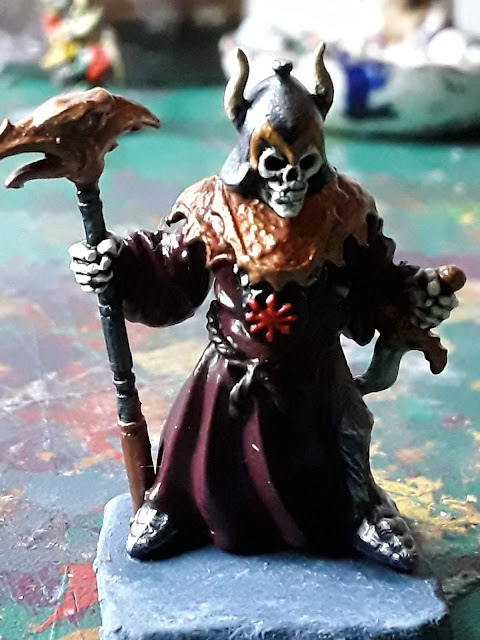 Update on my Ice Goblins. The original conversions were only so-so, and I felt that I could do a lot better at making them look like the actual monsters in the expansion artwork. These guys now have more appropriate winter clothing, extending the existing garments and added white fur trim. Santa would be proud. 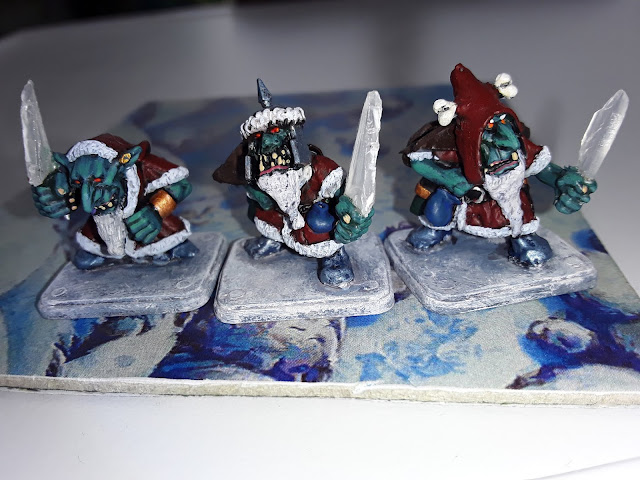 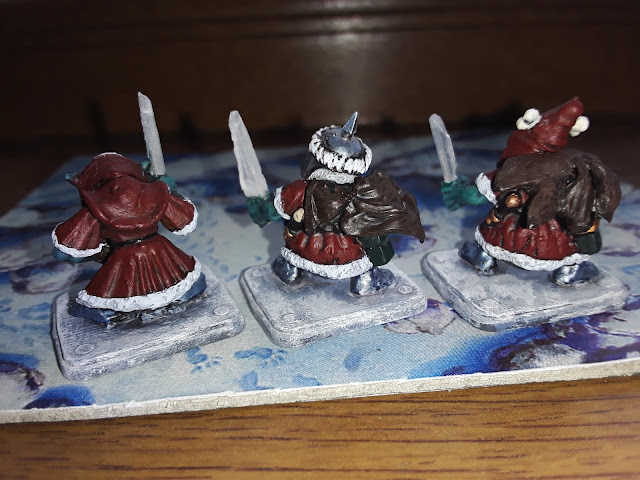