"The Emperor's personal Wizard, Karlen, has disappeared. The Emperor fears that either he has been murdered or succumbed to the lures of chaos magic. You are to find out what has happened to Karlen and, if he is alive, bring him to safety. You will be paid 100 gold coins each upon returning."
Mentor

Four Heroes enter the dungeon where Karlen was last reported seen. There have been no extra weapons purchased since we last saw these guys. Bretal the Elf has a lot of gold but he decided to save it up for a crossbow. My early decision to increase the cost of all equipment seems to be paying off, seeing as the Heroes are finding things quite easy and the last thing Morcar needs is these guys getting their hands on powerful weapons.
I know this quest too well to play as a Hero, so I took on the role of Morcar for this, with a new player slipping in to the skin of Rend the Barbarian. I changed the quest ever so slightly to throw off anybody else who may have had prior knowledge of the layout. 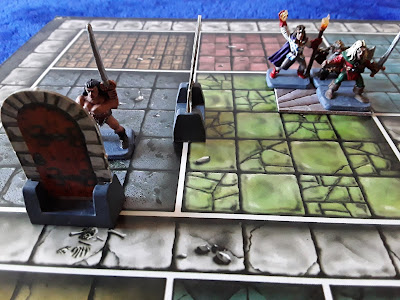 The first three rooms are eerily empty of life. Multiple treasure searches throw up no gold, but potions for each of the Elf, Dwarf and Wizard. Concoctions brewed by Karlen himself perhaps? 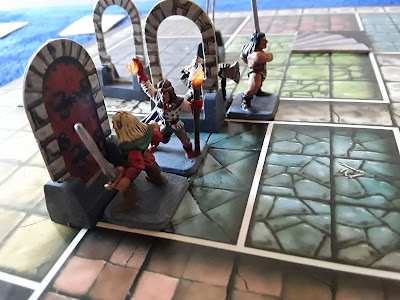 Still no sign of life as such, just these rattling undead monstrosities. Rend and Bretal send them back to the grave with no problems. 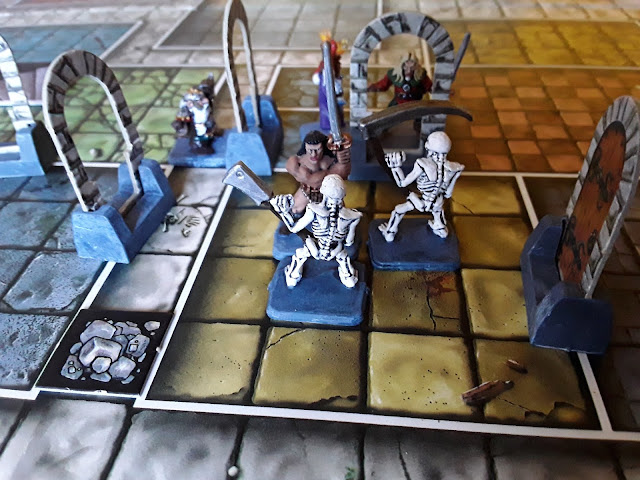 In the next room, two more skeletons slowly and jerkily raise themselves from the cold stone floor. This time it is Grimgold the Dwarf and Merkai the Wizard who despatch them. One kill for each of the adventurers so far! 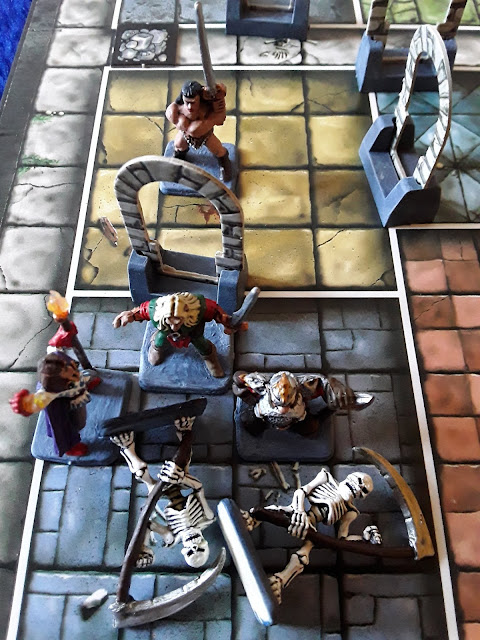 The Barbarian finds another of Karlen's brew's (potion of resilience) wheilst the elf finds a trap in the lower corridor... 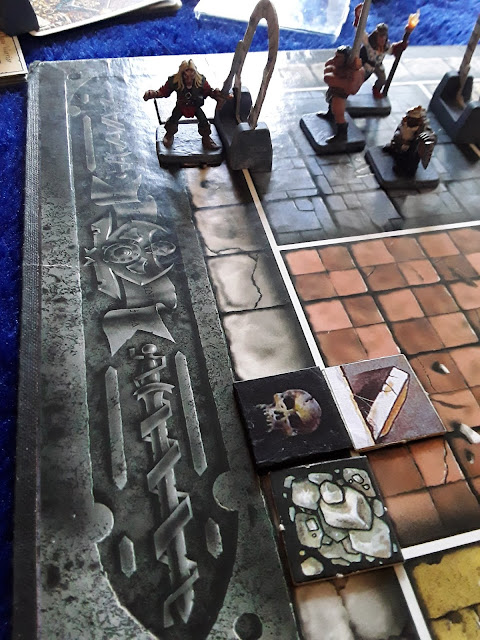 ...but promptly falls into another one in the next room. 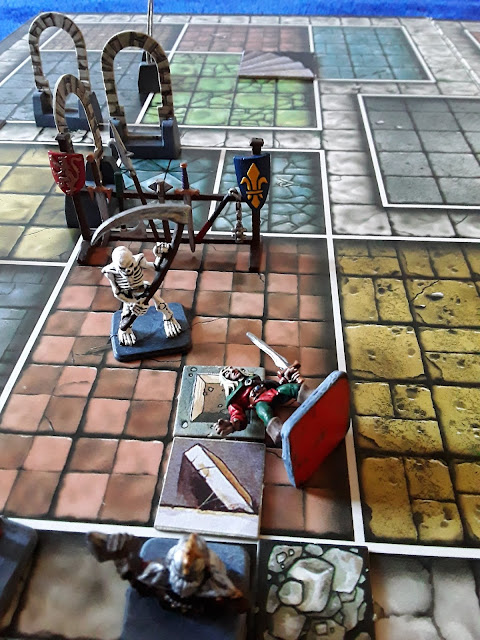 Grimgold defeats the latest skeleton, but the true spoils go to the Wizard; A gleaming suit of Borin's armour! This is the best artefact found so far (granting two extra defence dice to the wearer) and the other Heroes get rather upset that they didn't get to it first. 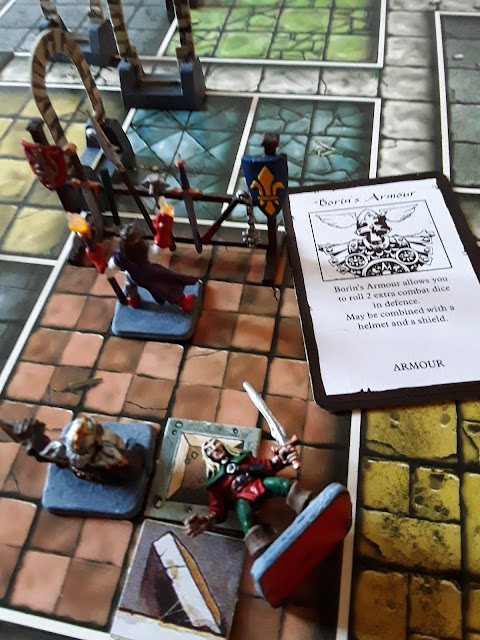 Bretal climbs out of the pit only to be attacked by a wandering monster, losing another Body Point. The Heroes quickly put aside their jealousy and attack the Mummy from all sides, hacking it to bits. This collegial behaviour is a far cry from the selfishness of earlier quests, much to my (Morcar's) annoyance. 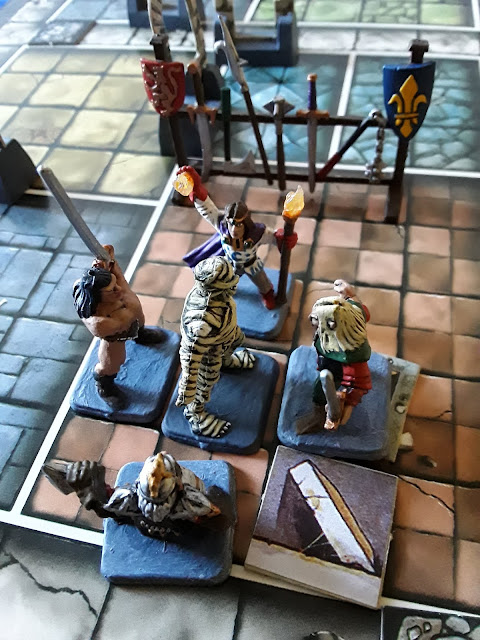 The Heroes backtrack to the centre of the dungeon, Merkai using Swift Wind to close the distance quickly (its always nice to see this spell used). Once there, the hapless Dwarf blunders into a horrible situation in which he is trapped between two hulking stone guardians. Their stone fists slam into his body, leaving large dents in his armour. In return, his axe does no damage on the moving statues. 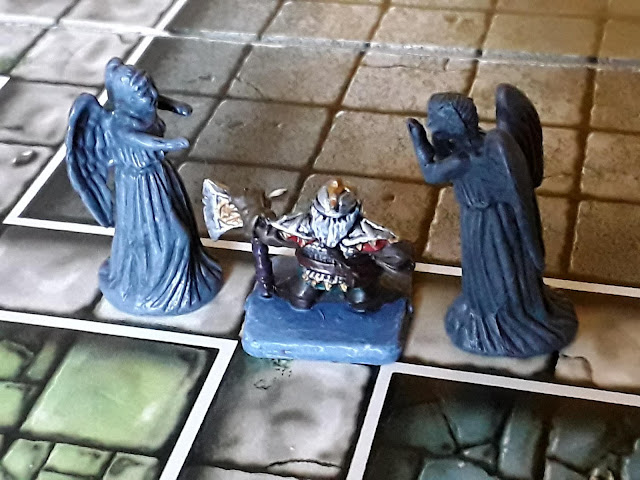 Merkai tries to come to his friends aid, casting Fire of Wrath on one of the creatures. I roll a black shield and defend against the attack, laughing that stone monsters don't burn particularly well.
Grimgold retreats to allow healthier Heroes to have a go; Rend flexes his mighty muscles and pushes one of the guardians over, where it smashes on the floor!
Bretal uses his agility to unbalance the other, which also breaks apart. 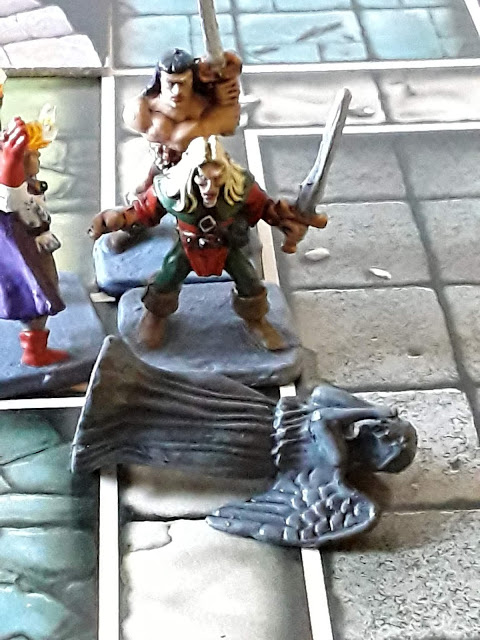 The ordeal isn't over however, as two more of the creatures stand guard in the other corners around the centre room.
The Wizard makes a better spell selection this time, using a Genie to demolish one of them. Meanwhile, Bretal takes advantage of the slowness of the other and also bests it. 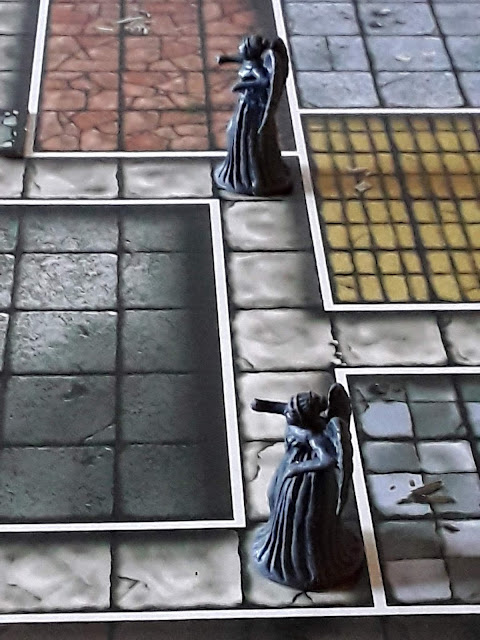 Shaken but not killed, the party continues. Grimgold finds a pile of gold coins beneath a creaking oak table. He loses one turn, grasping at the coins on all fours. 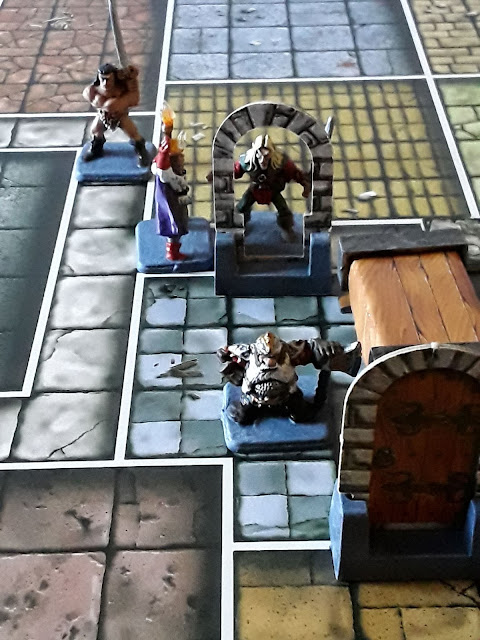 Another dire foe awaits in the next room, a gargoyle in stone form.
Rend selflessly blocks the doorway and fights the creature alone (you wouldn't catch me doing that if I was still playing the Barbarian).
The gargoyle is defeated but Rend drops to just 3 Body Points. However, the grateful Wizard uses Water of Healing to revive the heroic warrior. 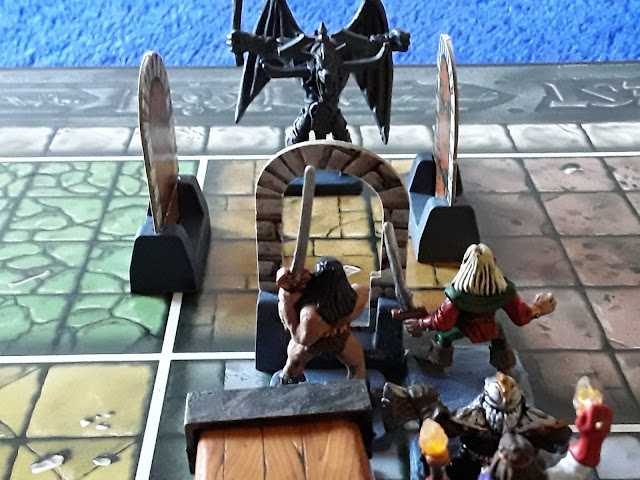 They are getting closer to Karlen, but chose the wrong door and disturb yet more dangerous foes... 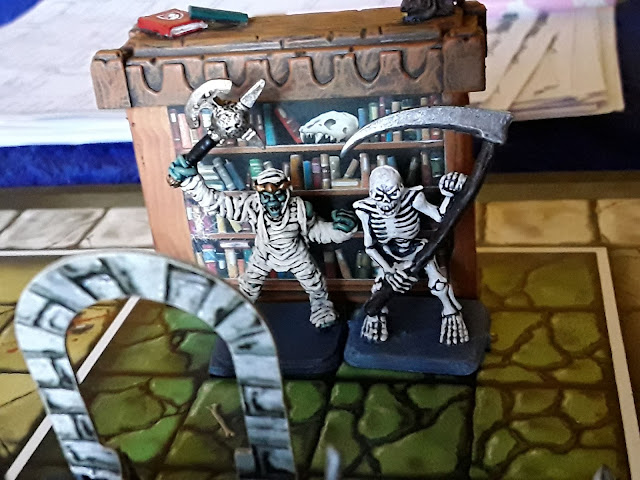 Clad in his new magical armour and feeling tough, Merkai goes toe-to-toe with this mummy. The monster (a metal oldhammer mini) is destroyed without him even having to resort to using a spell. 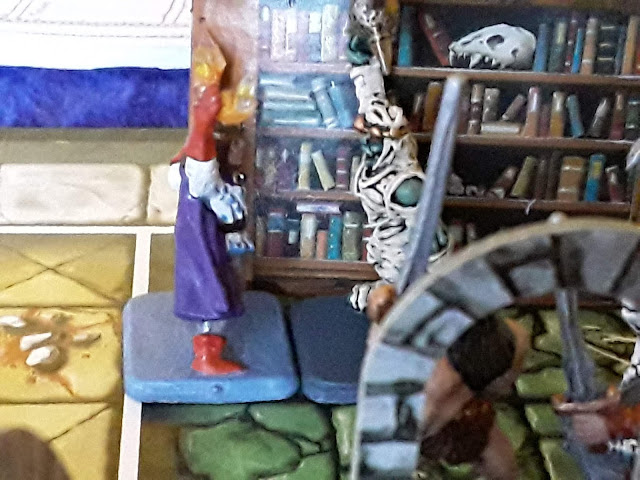 The illiterate Barbarian finds some gems on the bookcase. "Blimey, books are useful after all!", he snorts, as the wizard rolls his eyes. 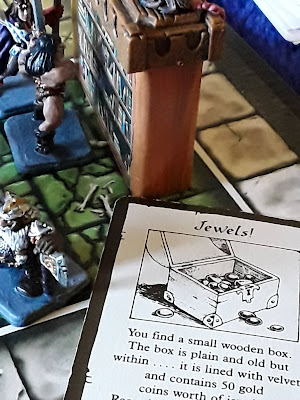 Finally, quest's end is reached. Bretal enters a sorcerer's laboratory and slays a zombie dressed in tattered robes which bear the insignia of the Emperor himself. Notes on the desk leave the party in no doubt that the zombie was once Karlen, enticed by the dark powers and consumed by a chaos spell! Good riddance to bad rubbish, sneer the pious Heroes. 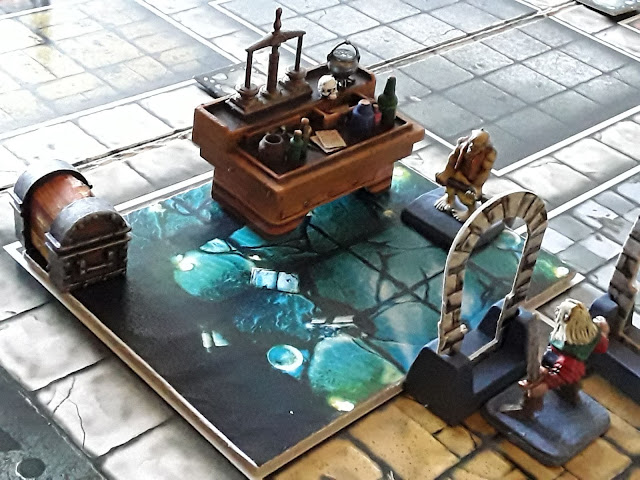 I inform the Heroes that the chest in the room can only be opened with a toolkit, which none of them possess. Even the crafty Dwarf has no trouble with the lock. I had devised this rule hoping that one of the players would then opt to buy a kit. A bit devious perhaps, especially as they lost out on 200 gold, but they will really need a toolkit at some point and I'm just giving them a little nudge (their lives might even depend on it hahahaha).
A nice quest but we are still none the wiser as to who or what the 'stone hunter' is. Was is Karlen himself, who perhaps created those magical stone guardians, or maybe the hero who defeated them and completed the quest? Answers on a postcard please... 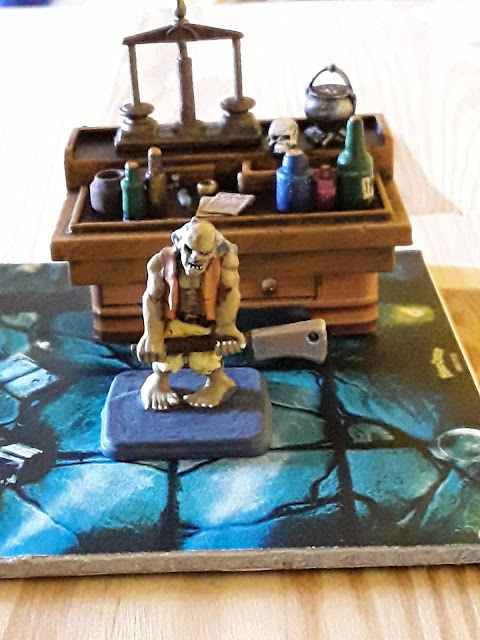 For those interested, the mini's I used for the stone statues are from Doctor Who. I bought them originally to use as statues in wargames, but thought they would go well in this quest. They had these stats - Move 6, Attack 4, Defend 4, Body 2, Mind 1.
Posted by Pancho at 06:44 No comments: