Quest 5 - The Rescue of Sir Ragnar


"Sir Ragnar, one of the Emperor's most powerful Knights, has been kidnapped. He is being held prisoner by Ulag, the Orc Warlord. You are to find Sir Ragnar and bring him back to safety. Prince Magnus will pay 200 gold coins to the character who rescues Sir Ragnar. The reward may be split between several adventurers, but no reward will be paid if Sir Ragnar is killed whilst escaping".
Mentor


It's been a while since the last quest and there's been a few developments. We are going to continue alternating between quests from the original game system and the fan-made 'Chronicles of Sir Ragnar', using two different groups of players, but the original Barbarian can't commit to regular games, so we have a new one. I'm sure it had nothing to do with the last Barbarian being slaughtered in the last game :(.
Rather exciting for me is that somebody else volunteered to play Morcar for this quest at least, and I get to play as the Barbarian. Even better, we are playing with a variant map so none of the players know where Sir Ragnar cell is. The variant maps are by Zenithfleet and can be found here http://forum.yeoldeinn.com/viewtopic.php?f=37&t=1463&hilit=all+heroes+die


Anyway, my new Barbarian is called "Rend". As a brand new Hero he has no equipment as yet. The Dwarf Grimgold is unchanged, as we decided to double the price for all equipment and he doesn't have enough gold even to buy a shield.
Amazingly, Bretal the Elf decided to keep the treasure chest and the 250 gold inside that belonged to Prince Magnus! This means he is now outlawed and will never become a Champion. After the bloodbath in the last quest the Elf figured he needed the gold more than he does his love of the love of the Emperor. He's never cared too much for humans anyway and his priority is to stay alive. Bretal has bought a shield and now has 3 combat dice in defence rather than 2. He still has 150 gold from his ill gotten gains left over for later.
Merkai the Wizard bought a staff, and can now attack with 2 combat dice, including against enemies that are diagonally adjacent. With a dagger already in his possession that he can throw if needs must, he is arguably now the most powerful Hero at the moment, with his Fire, Water and Air spells beefing him up.


To recap, Sir Ragnars companions managed to escape Ulag's dungeons in the previous quest. Mentor has thus sent the regular Heroes in to bust out Ragnar himself.
Rend takes the first turn, searching for treasure in the large central room and finding 20 gold. Nice start. 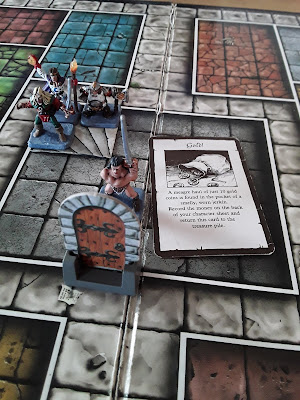 A gaggle of goblins right inside the front door. They were dealt with in short order by all four Heroes acting in concert. 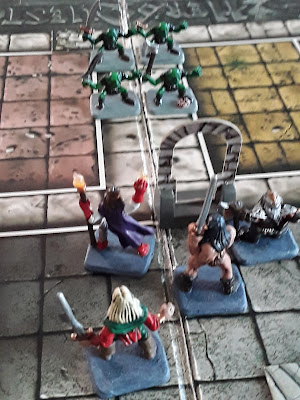 And then, true to form, the group starts to split up again!! My Barbarian ducked around the corner to the eastern corridor, but the Dwarf goes the other way and the Elf, never a team player at the best of times, goes south and opens the door to find to two orcs. He casts Rock Skin on himself in anticipation of the orcish attack. Fortunately for him the Wizard follows him that way, and helps the Elf by killing one of the orcs with Fire of Wrath. 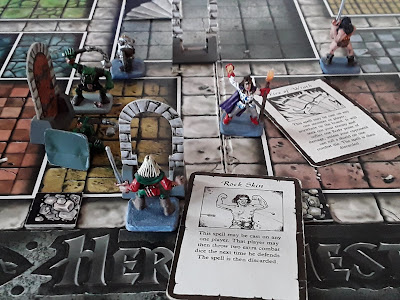 Rend continues east and confronts another Orc guard. I'm more than happy with my first attack, rolling 3 skulls and not even giving Morcar a chance to defend. Rend is living up to his name so far. 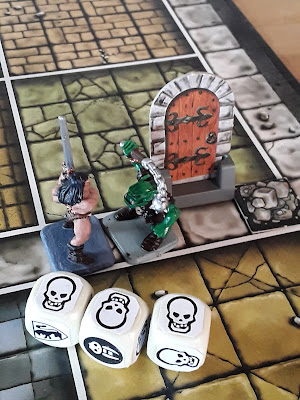 Flushed with my success I went through the door alone. The room was empty (except for another door), but a Potion of Strength was found. Grimgold decides to follow me this way but is taking some time on his stumpy little legs. 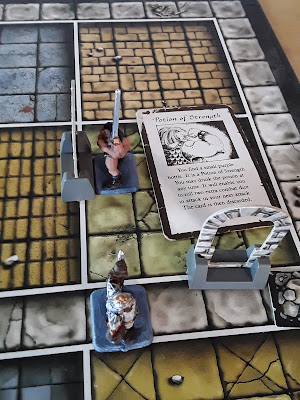 Bretal scouts on ahead and finds a secret door into a small room, that has a pit trap just inside. Without a tool kit (or a dwarf), the Elf and Wizard have no choice but to jump it if they want to continue that way. 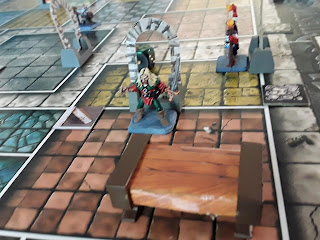 ....whilst Rend and Grimgold open the door to a find a Orc and some potential goodies... 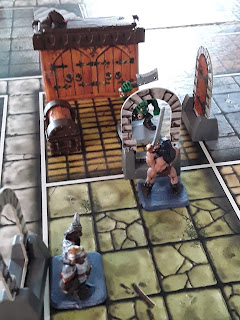 The Elf opens the door to the second small room and we all hold our breath as this is the room where Ragnar is found in the official quest. But only a zombie is there. A nice opportunity to use my newly converted Zombie. 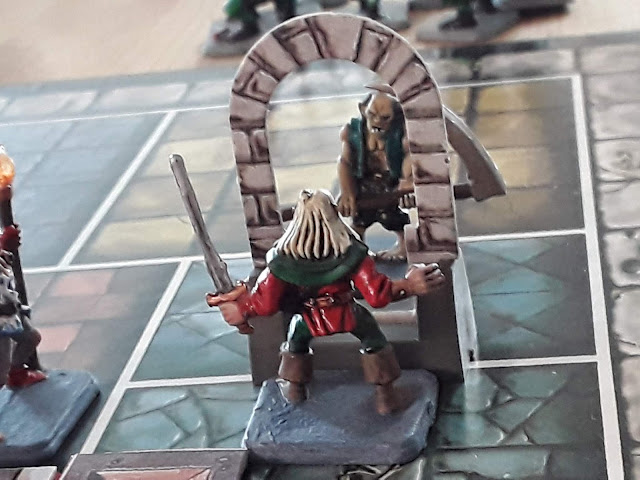 Merkai deftly jumps the pit trap, runs to the aid of the Elf and destroys the Zombie with a precise blow from his new staff. 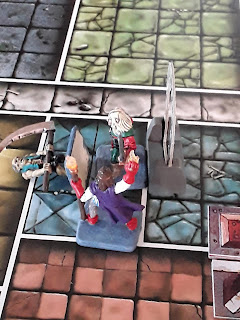 After slaying the Orc we greedily move on to the furniture. I decide not to search the chest for traps (as I didn't want to 'waste' an action and let Grimgold to steal the treasure from under my nose on his turn, and promptly lose 1BP to a spear trap!). The chest itself is empty :(.
Grimgold searches the cupboard and gets hit with another spear! Morcar is in stitches at this point. 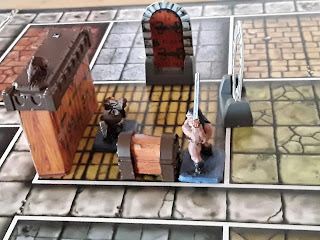 After an easy start the quest starts going badly, and all because we wouldn't work as a team. Again. Merkai draws a wandering monster card, and the Elf has already moved away beyond the pit trap. Thankfully the orc botches his attack. 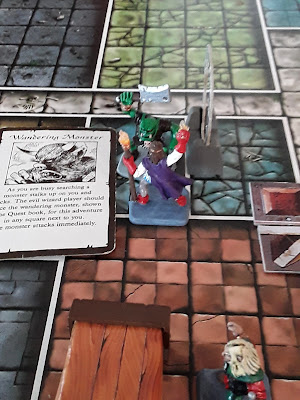 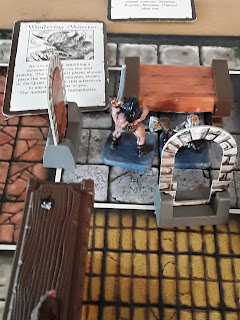 He kills the wandering Orc but opens the door to find all these... 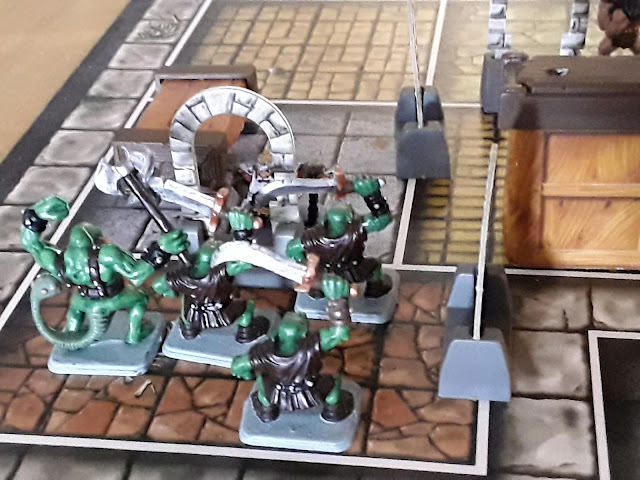 Merkai is also in trouble. Having used Sleep to avoid the orc and try to put the pit trap between them, he just falls in instead. Whats more, Morcar rolls well and the orc wakes up after just one turn of slumber. 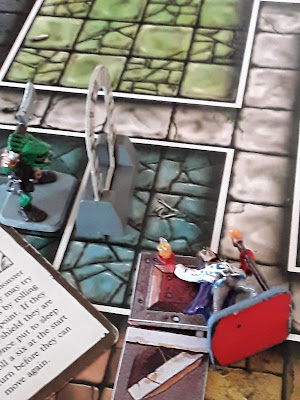 The situation looking across the board. Grimgold has slain an orc and retreated back to the same room as Rend. The recently awoken orc tries to hit the Wizard down in the pit but misses. Merkai then flees and the orc is killed when it fails to span the pit in its pursuit move. 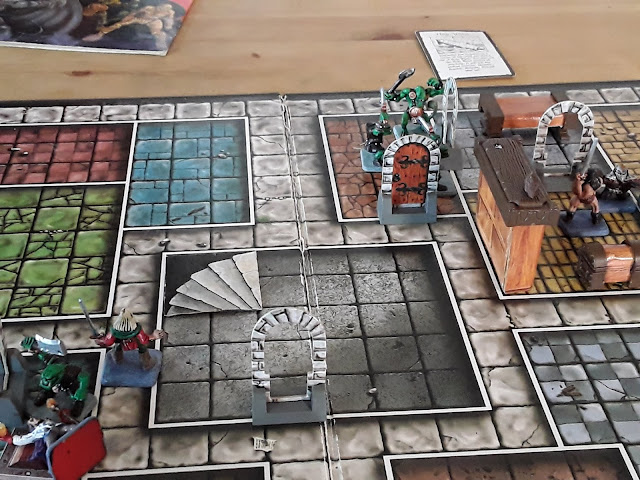 The Fimir leads his small orc warband into combat with the Barbarian. Rend is now down to just 4BP, so I swig my potion of Strength. This helps Rend bring down the Fimir in one attack. The two Heroes then finish off the orcs, taking one each, but not before my Barbarian has suffered another wound. 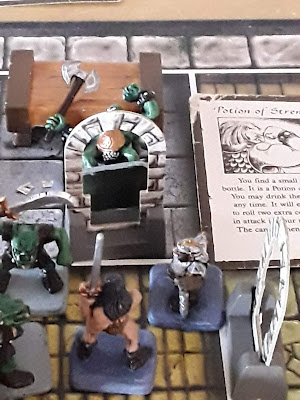 Bretal is off on his own again, this time scouting the dungeon towards the west. He slays another goblin and pockets the gold stash from the chest. No sign of Sir Ragnar yet though. 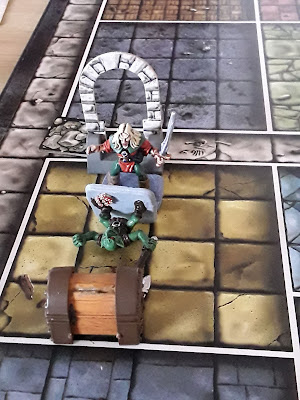 I search for treasure hoping to unearth a potion of healing and take yet another hit from an arrow trap shooting from the wall. Down to 2BP!
Not a moment too soon Grimgold locates a secret door and finds Sir Ragnar! I don't think any of us were expecting to find the cell in a corridor space. The special tile is by Valnar Nightrunner. 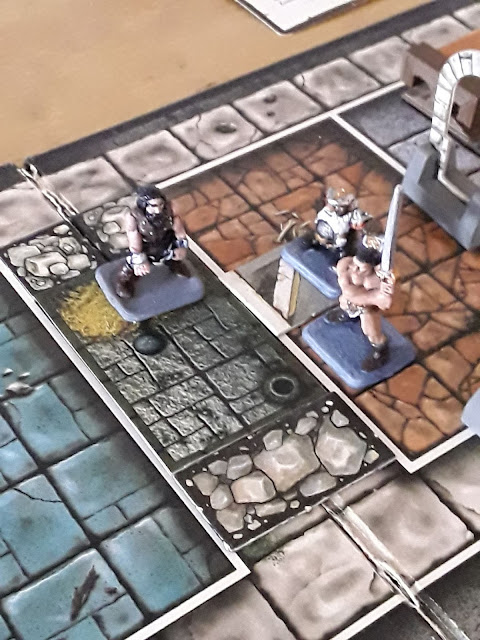 The alarm goes off but luckily Morcar informs us that there are no more monsters to fight. We've slayed them all and Sir Ragnar's cell is in fact the last unexplored area on the board. We call it a day, happy that no Heroes have been killed this time. All have suffered wounds except that pesky Elf. Grimgold decides to split the reward with me, as we fought all those greenskins together. Merkai and Bretal get only what they found in the dungeon. 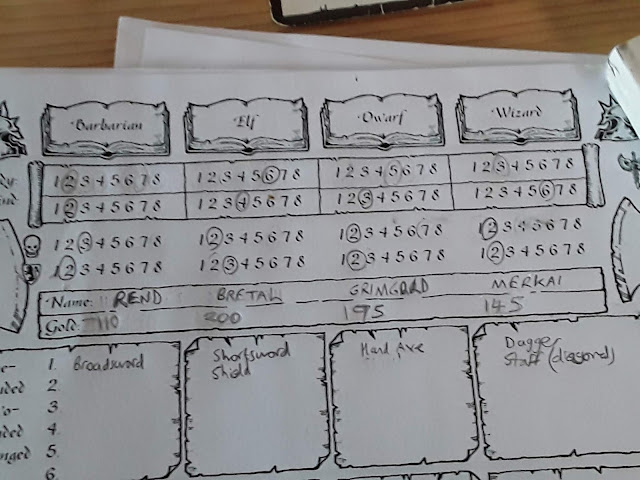 This was a nice variation to the quest, and we plan to use some more of Zenithfleet's maps for other adventures.
To be continued... 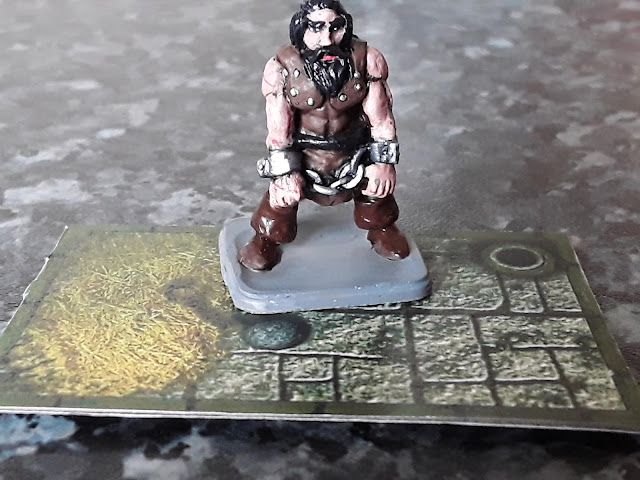