One of my favourite things in this hobby is modding existing models. There is something very relaxing about planning and executing a nice clean conversion.
In another thread I began showcasing some of the alternative figures I'll be using for the official HQ expansion packs. In this thread I'll be plotting my painting progress through a big batch of previously converted models that I plan to use for HQ. These will be additional heroes, monsters etc that might get a run out in some of the fan-made quests. The whole lot is shown below, assembled on homemade bases and ready for painting. 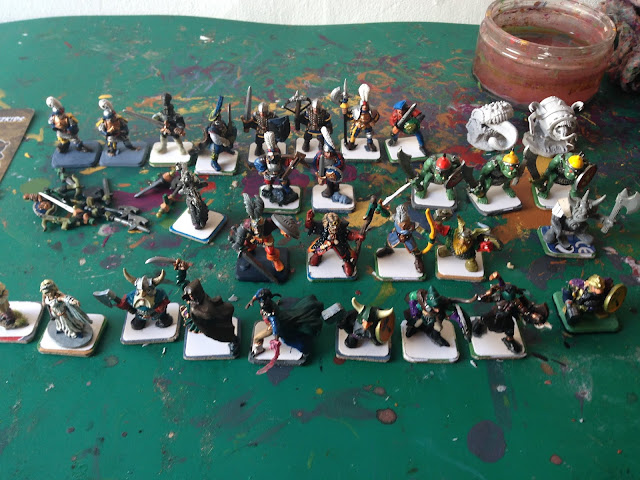 These are figures that I've been slowly gathering from gaming events, model shops and online sellers. Much kudos will be given to any enthusiasts who can identify these models, as I am not even sure about most of them myself.
Stay tuned for regular updates.


A couple more here. Ogres from Against the Ogre Horde that I converted (quite badly) some years ago, and could now do with some TLC. In particular the sword arm of the ogre on the left needs extending in order to match his other arm, and the messy fellow on the right needs to have his bloody bib altered. 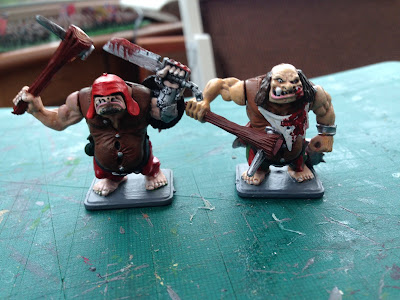 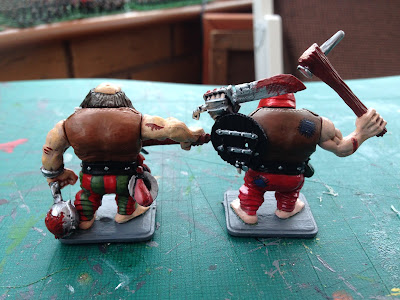 This is just a close up of the Wizard Hero from Advanced Heroquest, to show the home-made bases. Very simple (and cheap!), just a cardboard square cut to size as the bottom layer, then a thinner cardboard layer cut slightly smaller, and then both layers glued together. I think it matches the original HQ base design pretty well, once painted. 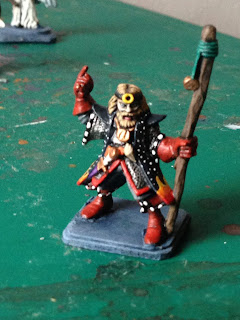 A close up of the converted dwarf hero, before painting (the model came with this paintjob when I got hold of it). The Hammer and shield was added by me, although I'm not sure yet whether I like this arrangement. Fingers crossed that this conversion makes the grade once painted. 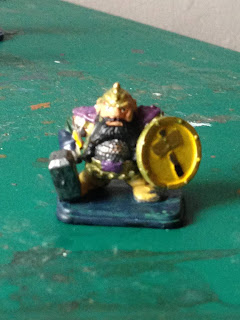 This was a much more successful conversion, to my mind. It's a female barbarian character intended for the Frozen Horror quest pack, made using a plastic wood elf archer with added sword and shield. Unfortunately so far this model has proven very difficult to photograph, but I can assure you she looks bad ***!!!! 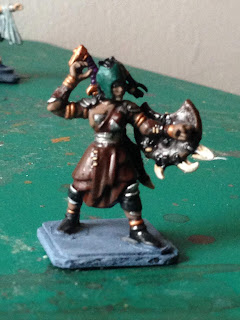 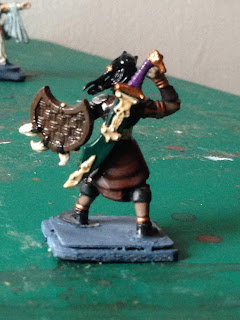 This is going to be a female elf for the Mage of the Mirror expansion. She has a plastic dark elf lower half and a metal elf top half (model currently unknown). I also added a plastic quiver and plan to model some boobs to make her look more feminine. Looking forward to see how this one paints up. 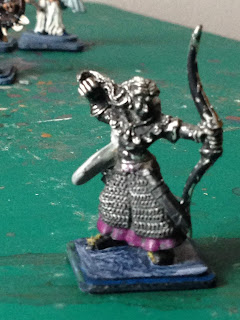 I intend to use these two characters for the same two expansions just listed; a barbarian elder and an elven Princess. Both of them have to be rescued in the official quests. Again, I am clueless about the origin of these metal models, having picked them out of in a random assortment at a games convention. The male looks a bit "cossacky", whilst the female might be an ancient greek, but I think they'll work as intended. 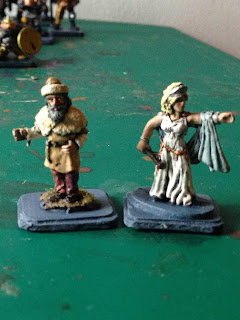 This was another fun conversion. A Warhammer 40,000 ork that I feel will make a great boss orc (i.e. Ulag or Grak) now that he has a replacement arm. Placed next to two standard HQ orcs as a size comparison. 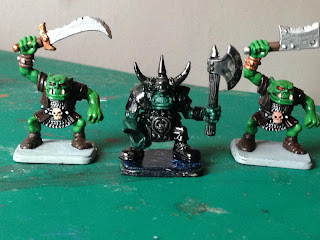 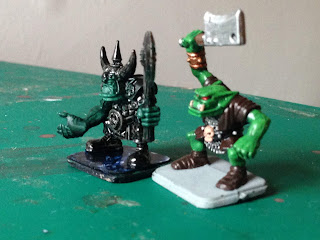 Next up we have the mercenaries. The guy on the left a the conversion from a Warhammer halberdier. The shield and halberd were removed and a hole drilled ready for mercenary weapon insert. Any of the pieces of equipment shown below will fit this model now, just like the original HQ mercenary models! 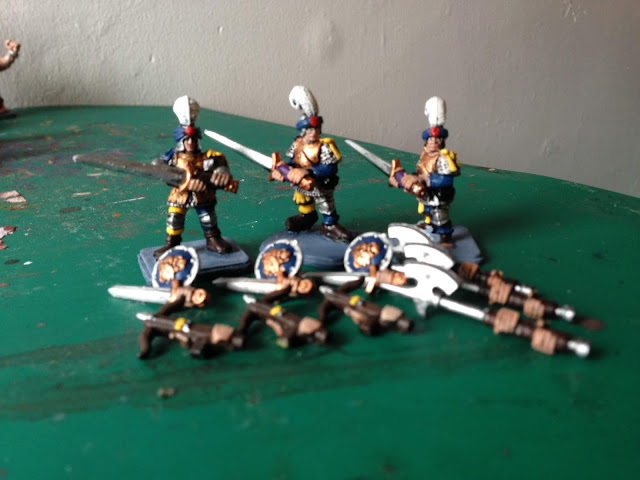 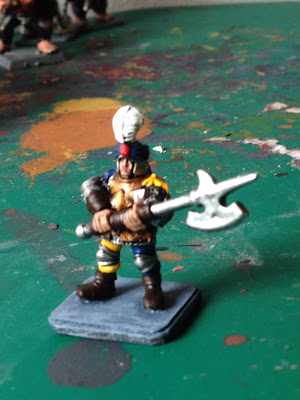 Some more mercs. The two on the left were damaged Advanced Heroquest mercenaries that had their original weapons snapped off. The guy on the right is another Warhammer Empire halberdier (but a different model to the previous one shown, and not a conversion). The yellow and blue uniforms ties all these different soldiers together on the game-board. 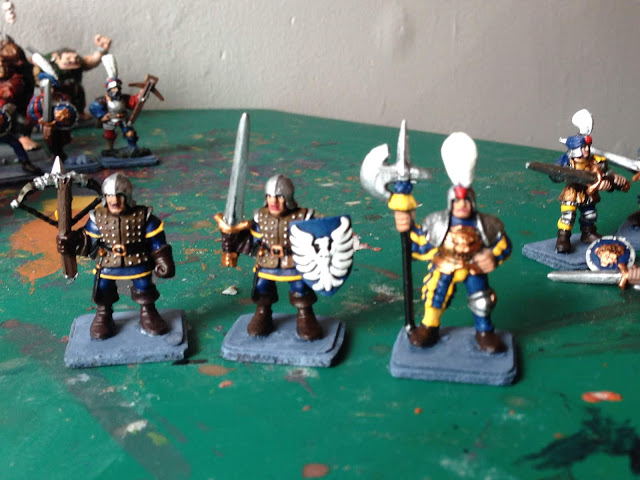 These are the four heroes that I'll now be using for the Chronicles of Sir Ragnar quest pack. From left to right; Sneeks the scout, Sir Ragnar, Sarymoor the crossbowman and Garmin the Swordsman. All of them are conversions, except Sarymoor (a metal miniature). I've painted them to resemble a unified band of professional soldiers with a different colour scheme to the mercenaries. Sir Ragnar, one of the Emperor's most able lieutenants, is painted red, blue and yellow to show his command status over both these heroes and the mercs. 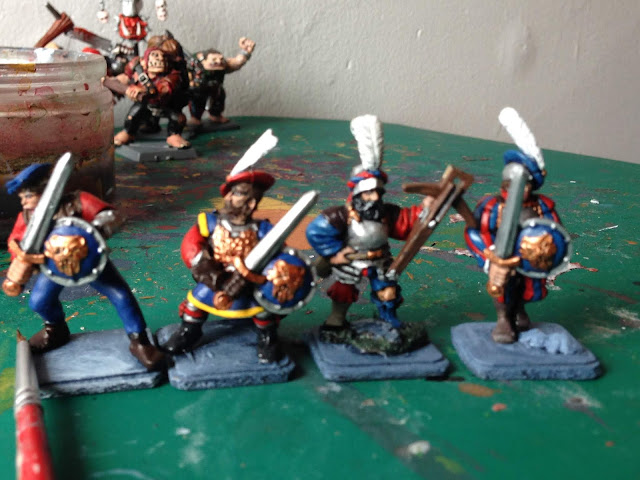 A close up of Sneeks and his commander. 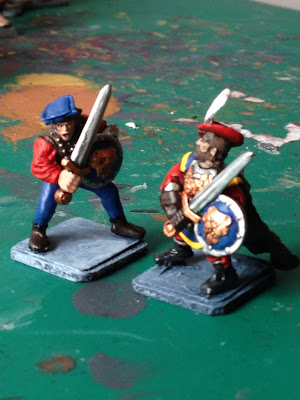 I'll be using this converted figure for Grak, the Orc boss. In the US version of the game Grak was an orc wizard complete with spells and artefacts, whilst in the original UK version he was known only for being "Ulag's foul offspring..." It's the latter character that I have created here. 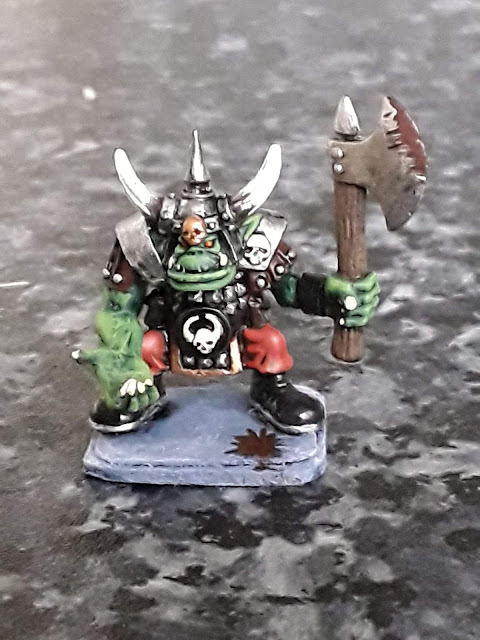 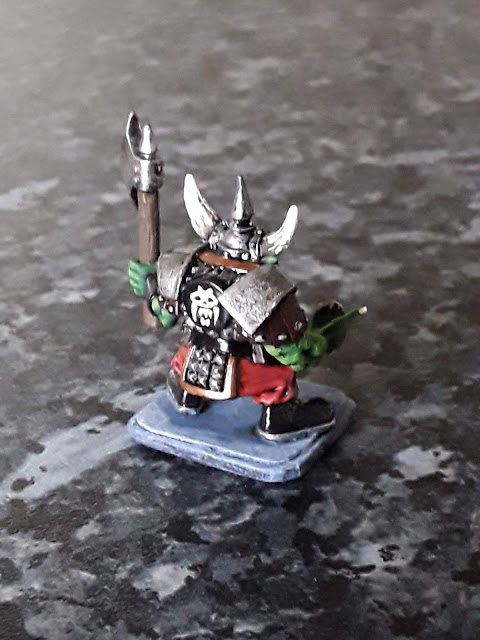 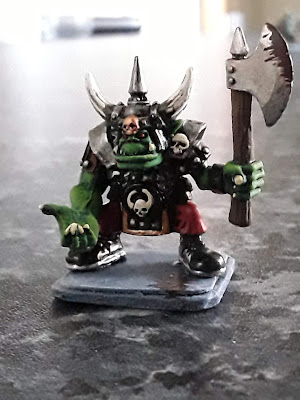 I decided that I wasn't happy with my previous attempt at Sir Ragnar as he was really squat and stumpy looking. I extended his legs and painted his hair and beard black in order to better match his incarcerated self on the left. I think they are quite a close match. Now I just need a model to represent the fallen, traitorous Ragnar who serves Morcar, and I'll have a complete set. 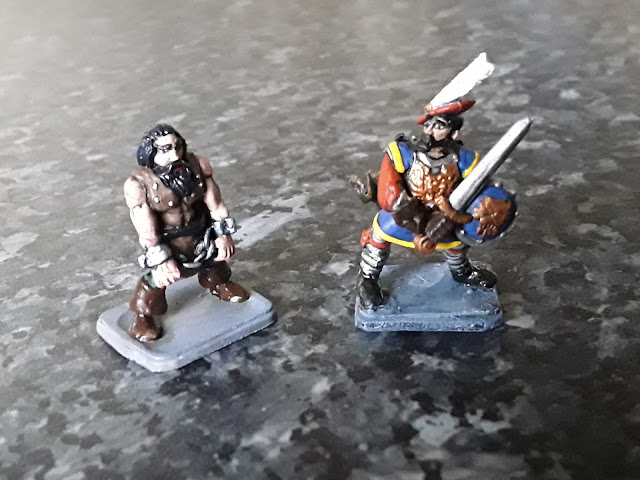 A variant of the Elf Hero, this is the model I'll use as my Ranger. He will have a trio of powerful new spells, which I'll cover in another post.
I believe this model is a plastic warhammer wood elf archer, to which I have just added a shield. The detail on the shield is shown below and is based on images of the Green Man from mythology and folklore. 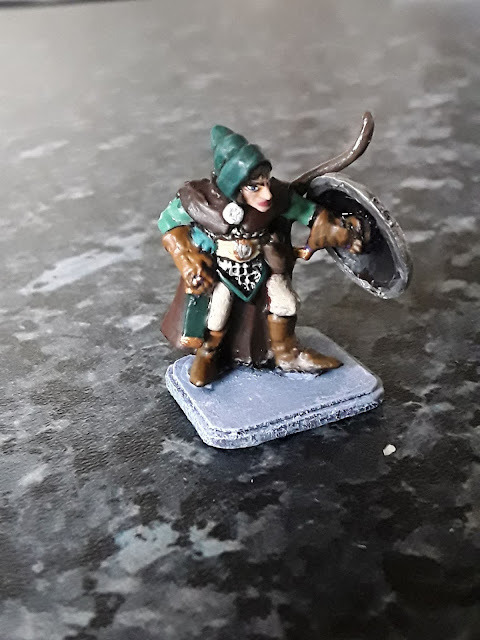 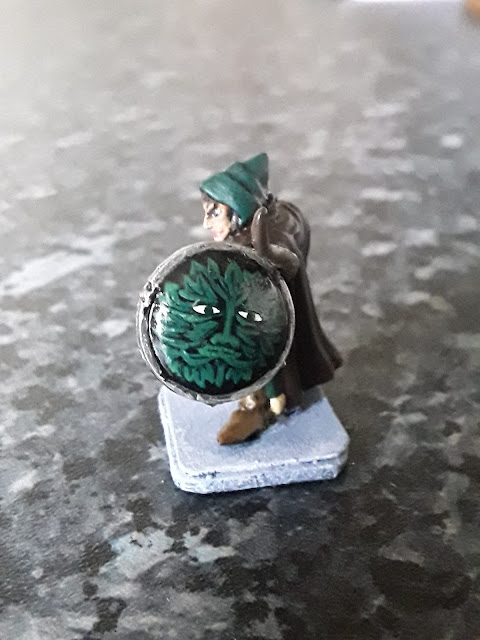 The Dwarf Hero from Heroquest doesn't really lend itself to elaborate conversions, so I've opted for a simple arms swop. 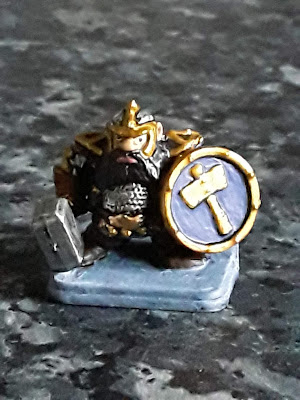 I picture this guy captured in the moment of a brief rest, stealing himself just before he powers into action smashing monsters to bits with his lethal hammer... 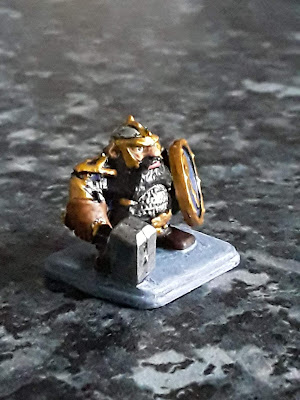 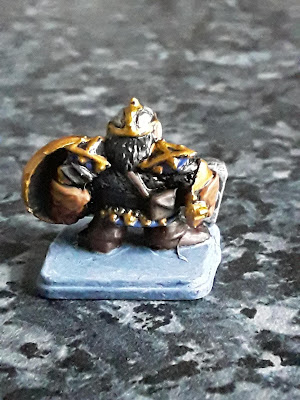 This is one of the Heroes from Advanced Heroquest. I've been trying to get hold of these for a while and finally managed to pick up all 4 Heroes on the cheap. They were all in good condition except for this one - I had to add the plume, shield and an entire new sword arm (hence his inclusion on the conversion thread). 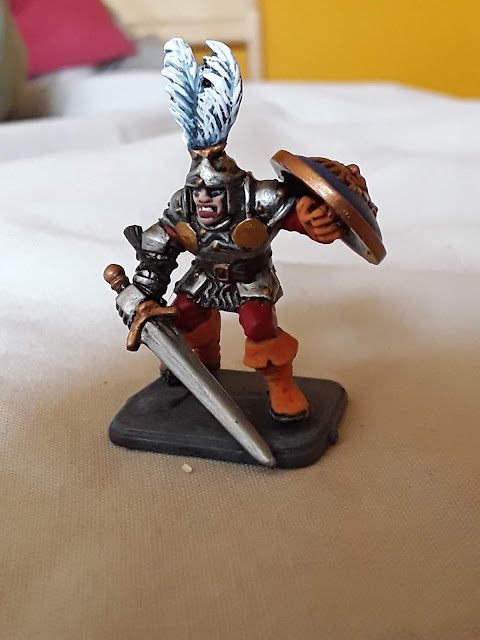 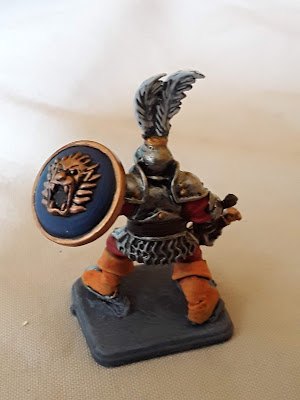 And the whole gang together; 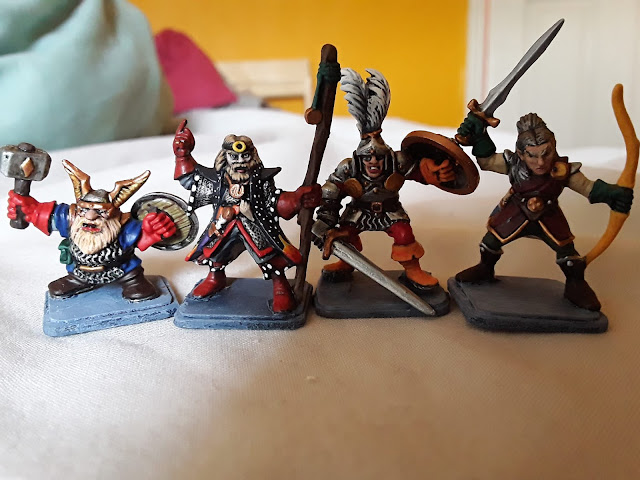