I've been intrigued by this quest for a while now. Its a gigantic 13 stage quest spread over 4 standard Heroquest boards. The Hero party can cross between the four boards using special doorways, with the board being reset each time, but there is no recovery of health or spells at all! To make it worse, Morcar has the use of some fearsome new henchmen called Dark Warriors. All in all its a bit of a beast. Maybe too much of a beast. Players have complained that its too confusing with all multiple exits off the boards. As with many the HQ expansions, its a great concept that doesn't quite meet the potential (usually down to a lack of play testing).

So I decided to redesign the Dark Company. One way to do it is to actually have four boards, with 4 sets of furniture, so that the map doesn't have to reset each time. However, that only works if you actually have 4 Heroquest sets (not to mention a table big enough to fit it all on). I'm not so lucky and at todays EBay prices for the game...no, that's not gonna happen.


Another way to do it (my eureka moment!) is to reshape the layout so that all of the early stages are represented on just one game board, before the Heroes find a single exit that leads to the next game board (which has the next stages), and so on. In other words, making it more like a traditional quest pack, but keeping the concept of no recovery of health & spells.


A quick drawing of how the 13 stages link together in the official quest showed that it was indeed doable. Each of the dots is coloured the same way as the stage in the quest book, with the size of the dot approximately representing the size of the stage (number of rooms etc). I figured I could group the stages together using the dotted lines shown below, with each grouping representing one 'dungeon level'. If the Heroes were tough enough they could battle their way all the way to dungeon level 4, and the final showdown with Hinsgrim, the boss of the Dark Company. 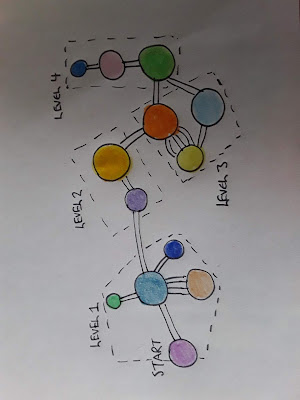 Below you can see Dungeon level one. It was a little bit of a squeeze, which was not surprising as it has the most stages crammed into it, but it does make a nice looking quest map. I only had to eliminate a few empty rooms, combine a couple of rooms into a single room, and change the flow a little bit, and it checked out. Crucially, it has the same number of monsters as in the official map, and uses the doors and furniture available in just one Heroquest set.
The quest notes are below. DW on the map stands for Dark Warrior. (The wandering monster for the entire quest pack is also a single Dark Warrior) 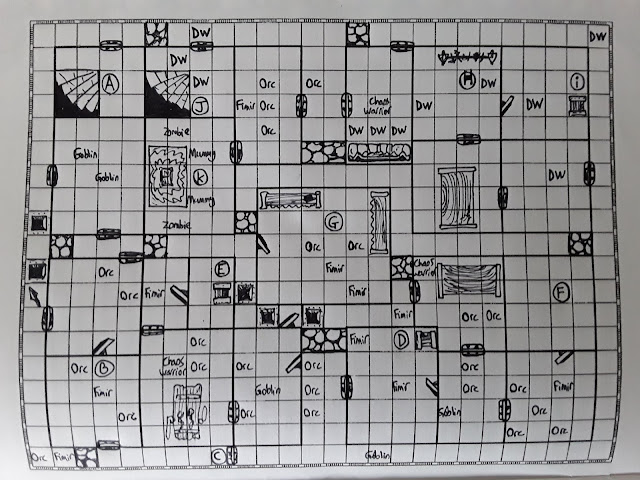 A - The Heroes begin the adventure on this stair tile. They must find another stair tile in order to progress to Dungeon level 2.
B - This secret door may be opened by the Evil Wizard player on his turn. The monsters in the room are placed on the game board and may move and attack.
C - The closed door here separates the corridor into two sections. Once opened, remove the door from the game board.
D - The treasure chest contains two hand axes.
E - This chest contains 50 gold coins.
F - Any character stepping into this room will notice how warm it is. If he finishes his turn standing in this room he must roll one die. If he rolls equal to or greater than his mind points, he falls into a wasting sleep and loses one body point. On his next and subsequent turn, he must attempt to roll equal to, or less than  his mind points on one die or remain asleep and lose another body point. If he does awake, he may take his turn in the normal way.
G - A Hero searching for treasure in this room will find a magic scroll of spells. If the Elf or Wizard find this they may choose to miss one turn and read the scroll. Once the scroll has been read, it disappears. The reader may then regain all the spells he had at the beginning of the adventure.
H - A Hero searching for treasure will find a crossbow on the weapons rack. However, there are only 6 quarrels. Each time the player fires the crossbow, mark of one quarrel on his character sheet. If he runs out of quarrels the crossbow cannot be used again until he finds some more.
I - This treasure chest contains a potion of healing which will restore up to four lost body points.
J - This is the exit to the next dungeon level (level 2).
K - This is a Shrine of Learning. Once  all the monsters in the room have been defeated, the Elf or the Wizard can attempt to build a full complement of spells through meditation. The player rolls one die on his turn. If he rolls equal to or less than his mind points tally, he can regain all the spells he had at the start of the adventure. If he rolls a greater number, he is gripped by a magical vortex and loses one body point. 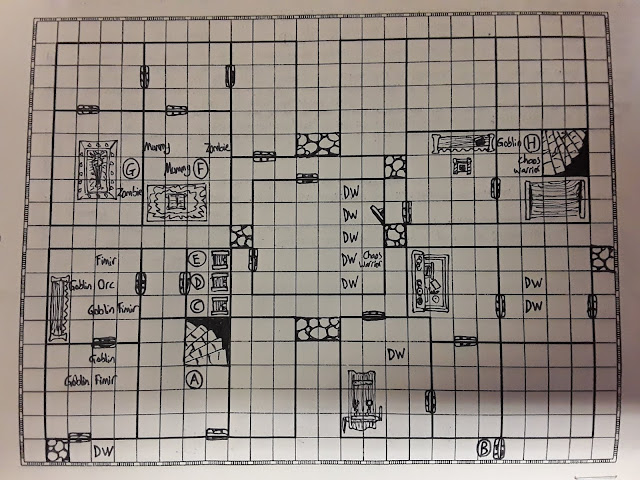 A - The Heroes begin this dungeon level here at the stair tile. Remember, health and spells lost in the previous level are not recovered for this quest. The Heroes must find another stair tile to progress to Dungeon level 3.
B - The closed door here separates the corridor into two sections. When the door is opened, Mentor appears as a spectre to the players and says the following before disappearing: "Beware the ghost of Vadim Gorfell. Fight him not". Once opened, remove the door from the game board.
C - This chest contains a trap which will be found if a Hero searches for traps. If the Hero opens the chest he will lose 1 body point.
D - The treasure chest contains 100 gold coins
E - This chest is a trap. Even if a Hero searches for traps he will not find this one. If the Hero opens the chest he will lose 1 body point.
F - If a Hero searches for treasure in this room, read out the following. "You notice on the altar a magic Rune book. As you read the pages you feel raw power flowing through your body. Your strength increases and you see great spells before you. Movement! A growing shadow! The Gargoyle strikes, leaping from the pages. Place the Gargoyle next to the Hero. It attacks immediately, in the same way as a wandering monster.
G - This is the Tomb of Vadim Gorfell. The zombie which represents his restless spirit cannot be defeated in combat. If any player attacks the zombie, roll the defence dice in the normal way but then inform the player that the zombie has survived. The only way Vadim Gorfell can be destroyed is by a spell which inflicts one or more body points of damage.
H - This is the exit to the next dungeon level (level 3). 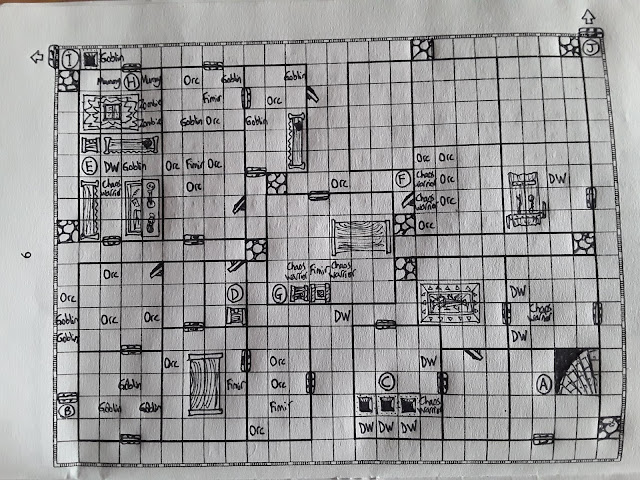 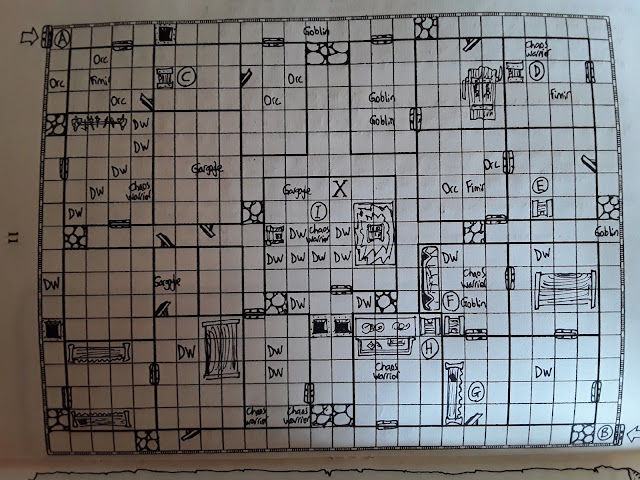 
And here are the Heroscribe Quest maps, courtesy of Anderas; 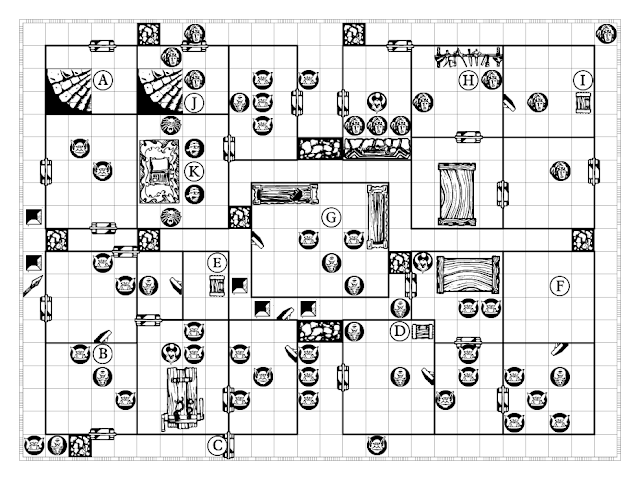 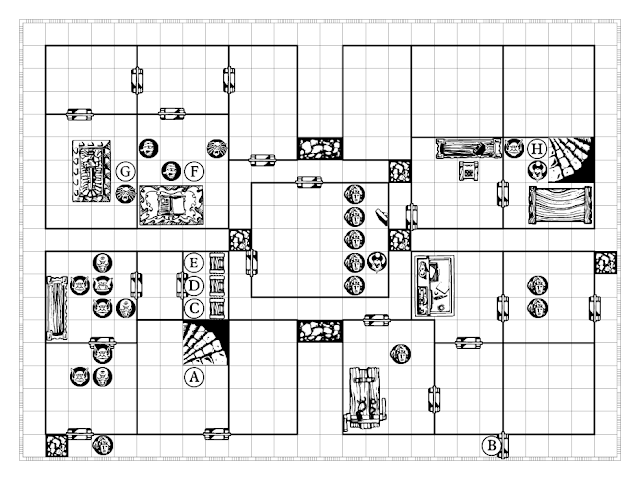 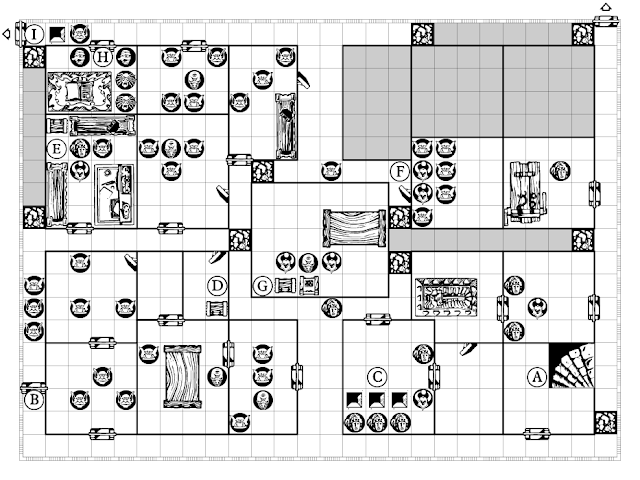 Level 3 above is missing a doorway into the centre room. It should be in the square next to the orc standing sentry outside.
I made a quick colouring of the original hand-drawn maps, just so people can compare my redesigned dungeons with the layout of the 13 stages in the official adventure. 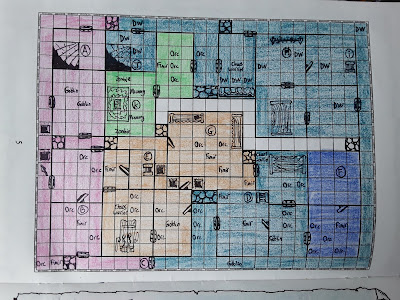 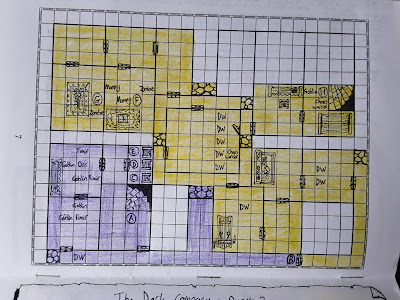 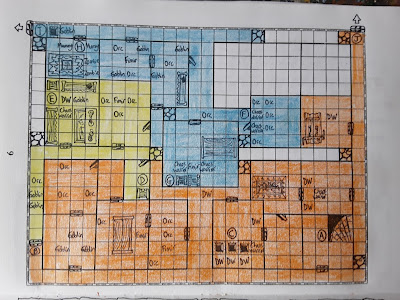 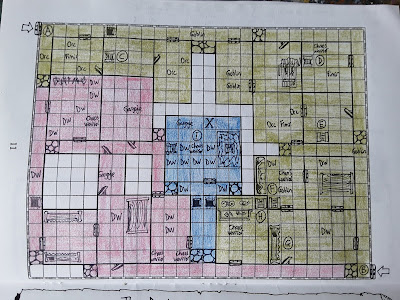 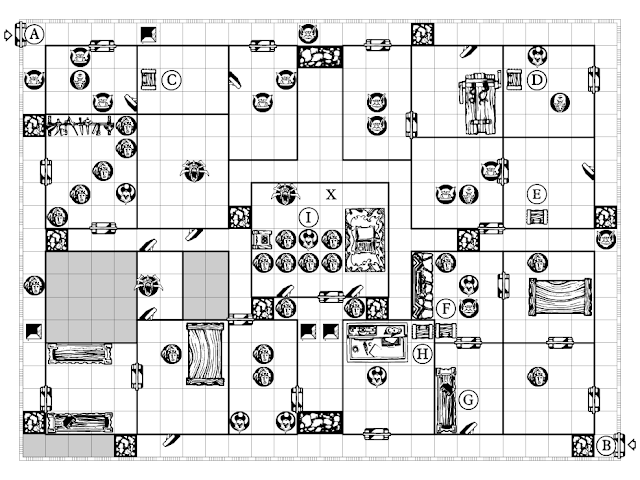