Quest 6 - Lair of the Orc Warlord

"Prince Magnus has ordered that the Orc Warlord Ulag, who was responsible for the kidnapping of Sir Ragnar, should be sought out and killed. Whoever kills Ulag will be rewarded with 100 gold coins. Any treasure found in Ulag's stronghold may also be kept".
Mentor


I thought it would be fun to have the alternative Heroes from the Chronicles of Sir Ragnar take on this quest. It makes a bit of sense in terms of the storyline so far, seeing as it was Sir Ragnar and his boys that lost the original fight against Ulag and ended up eing imprisoned. Now that they are all free, they are chomping at the bit to gain revenge on the Orc Warlord.


I was excited to put on this quest night as I've been very busy recently, not only repainting my orcs and Fimirs, but also painting up better miniatures for these alternative Heroes than what I had for the previous adventure. Not only that, but I've finished painting ALL of my Heroquest furniture! Check out this little box of goodies; 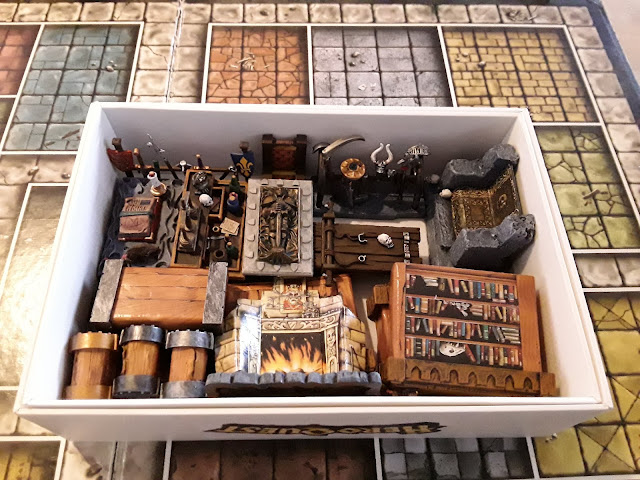 Here are the five heroes descending the stairway into Ulag's lair. Sir Ragnar is leading the way, then clockwise from him we have Sneeks the scout (new model), Zaphod the wizard, Sarymoor the crossbowman and Garmin the swordsman (another new model).
I knew I would have to make some changes to this quest to balance out the fact that these Heroes have very different abilities than the traditional four. These guys are low in body points but own much more equipment than a Hero at this stage should really have. The traditional Heroes have a combined total of 25 body points plus a guaranteed 8 8 body points of healing from the elemental spell decks. Sir Ragnar's crew also have 25 combined body points, but no access to the healing spells. I figured that their available armour would more than compensate for the missing spells. I also needed to account that these guys are harder hitting than a Hero should be at this point, so I planned to add in four more orcs. As if anything else needed to be thrown into the mix, I also changed the layout of the quest a little. This was my devious plan to keep any players who may have already played this quest on their toes. I just hoped that all these changes wouldn't break the game... 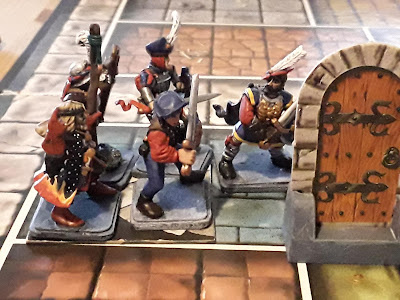 Sir Ragnar led the way through the first doorway and was confronted by two goblins on sentry duty. Rather ignominiously he failed to land a hit, ended up blocking the way forward for his men, and then suffered a wound from one of the goblins. Ragnar  eventually slew the creature, allowing him to move aside and let Garmin through the doorway to impale the second sentry, The photo shows the Warhammer Fantasy Empire figure that I'm now using for the swordsman, a rather dashing figure full of character. The goblin itself has a converted shortsword and a much paler green skintone than previously shown. 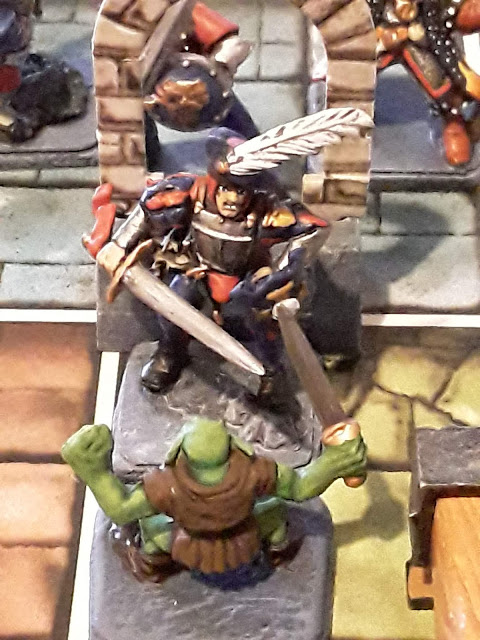 With the goblins gone the band joyously begin the business of plundering the room. Sarymoor finds a potion of Heroic brew on the table, but Zaphod Swiftspell is not so lucky and gets hit by an arrow trap. On the next turn Zaphod casts Enchant Weapons, a powerful spell that adds one combat die for every Hero in the room, when attacking with their weapon of choice . This enchantment lasts until any one of the Heroes is killed, so is a very big boon. 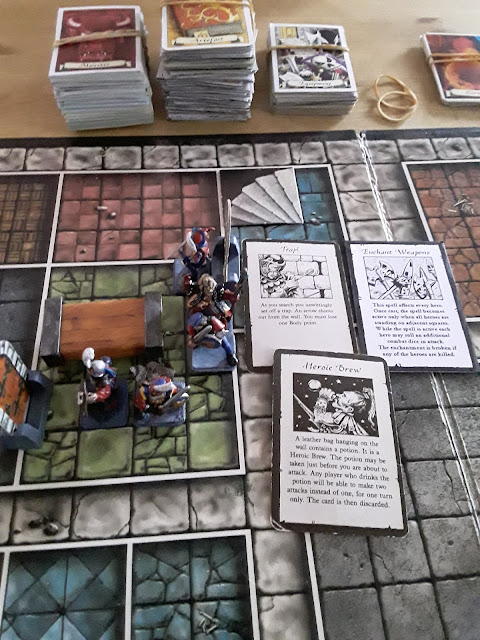 In the next room are some orcs who are not too happy about having their fireside chat disturbed by Imperial soldiers. One of the orcs has had a head swop, and the fireplace has had its base painted/ some cobwebs added (mostly to disguise the damage to this overly-used three decade old model!). Sarymoor shoots the shouty orc dead with his now enchanted crossbow, whilst Sir Ragnar takes care of the other an enchanted broadsword. 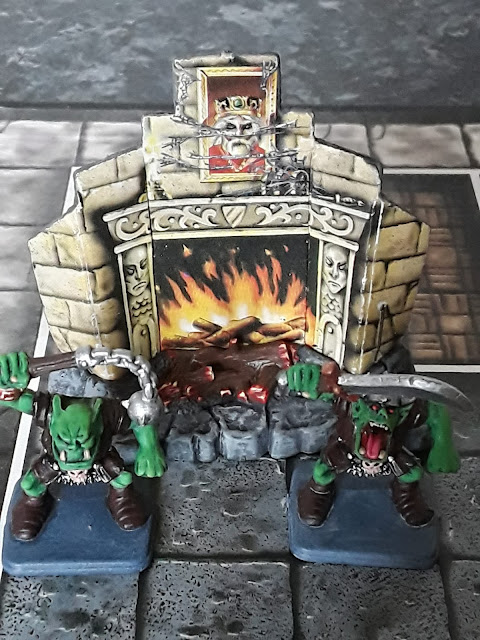 Flushed with their easy success with the monsters so far, the group decides to split, Ragnar and Sneeks, heading towards a small room containing two more orcs. Sneeks disarmed a trap along the way with his dwarf-like abilities. The other guys head north. 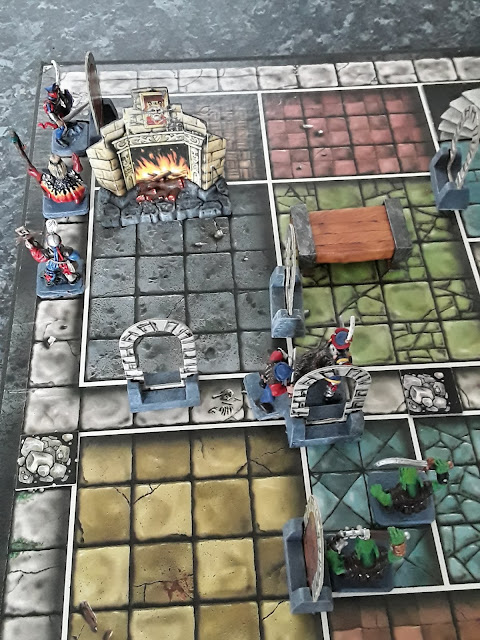 Garmin finds an orc and a freshly painted pink Fimir. 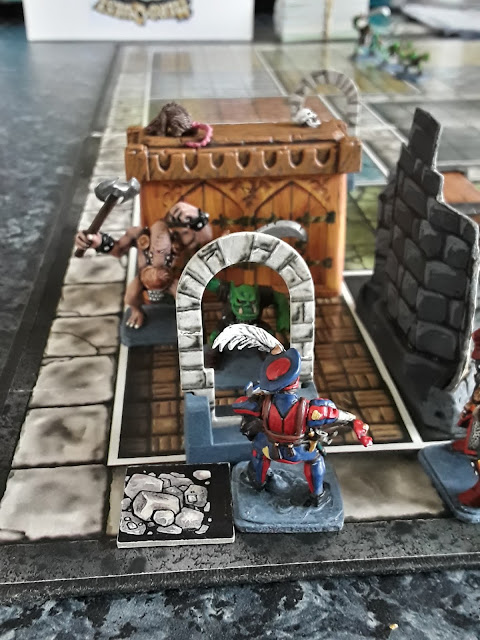 A close up of Garmin the Imperial swordsman. Along with Sir Ragnar, he is the most capable hand-to-hand fighter in the group. He killed both monsters with his enchanted broadsword, suffering no loss in return. He is rewarded for his efforts with a potion of healing plundered from the cupboard. 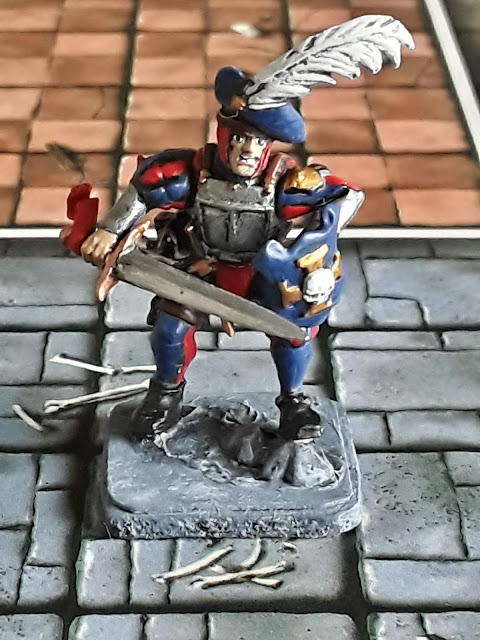 In the small room Sir Ragnar and Sneeks are having a much tougher time fighting the orcs. The wizard runs back to help out, thrusting an enchanted dagger through the eye of one of the orcs with a sideways glance at his captain as if to say "THAT'S how you're supposed to do it".
In response Ragnar barks out a warning to watch out for the other orc; who promptly rolls 3 skulls with its attack on the wizard! This is serious stuff as Zaphod only has only 3 body points left, and no chance to heal. If he doesn't roll a shield for his defence he's a goner. Thankfully for him he manages one shield, and clings on to life with 1 body point. Ragnar then brings down the last orc. 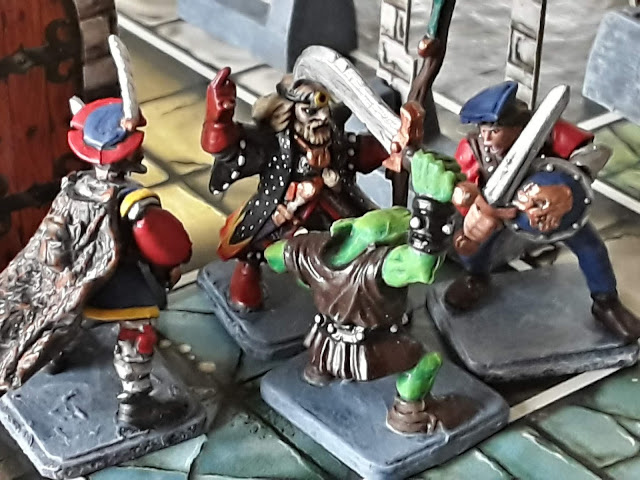 Sarymoor has also backtracked to join with his captain, and in the next room he finds a Spear on the weapon rack. As he needs both hands to use his crossbow, the spear goes on his back, ready to be equipped in any fight in which the enemy is too close to use a ranged weapons.
With most of the party now reunited, Ragnar throws the next door open with a crash, only to find this horrible lot; 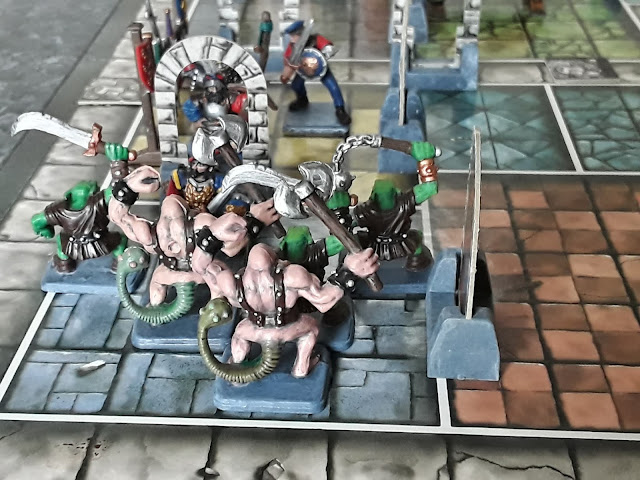 Undaunted, Ragnar charges into battle against the nearest one-eyed monstrosity. The beast seems up for the fight though, rolling two black shields and taking no damage. 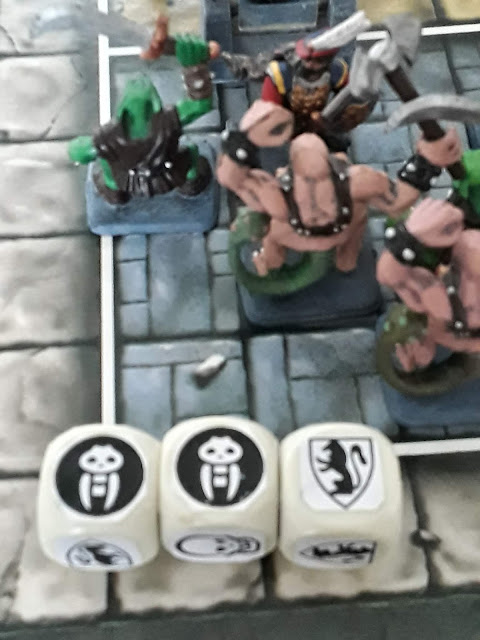 Up against it in the south, Ragnar could really do with Garmin's help, but the swordsman is still way back near the room with the cupboard, having rolled snake-eyes twice in a row for his movement, followed by a pitiful 3! 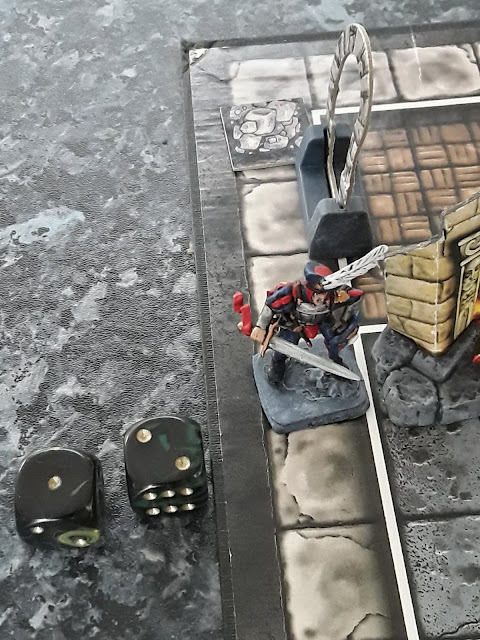 The big fight rages on, with Sarymoor slaying one of the orcs with a well placed bolt and Sneeks taking care of another with his enchanted shortsword. Zaphod is forced to hide in the yellow room, as he is bleeding from multiple wounds and close to death. 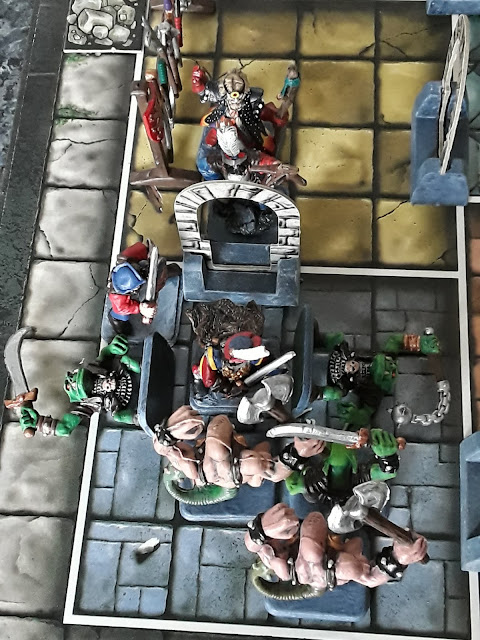 After a fierce struggle the remaining monsters are brought down by Sir Ragnar and his men, but Ragnar is down to just 3 body points. And still no sign of Ulag the Orc Warlord. Sneeks has other priorities at the moment, finding a treasure chest in a secret hallway... 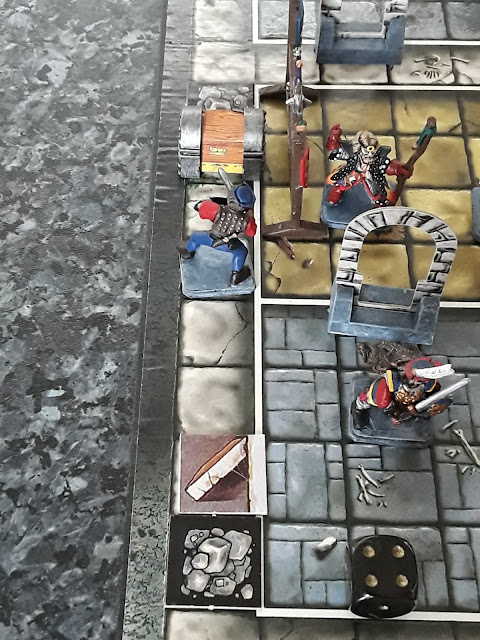 Sir Ragnar searches the room for treasure but triggers a Wandering Monster (giving me the chance to use the newly converted orc again). This is the second time in the quest that an orc has a chance to actually kill a Hero, but Ragnar defends against all but one of the hits against him. 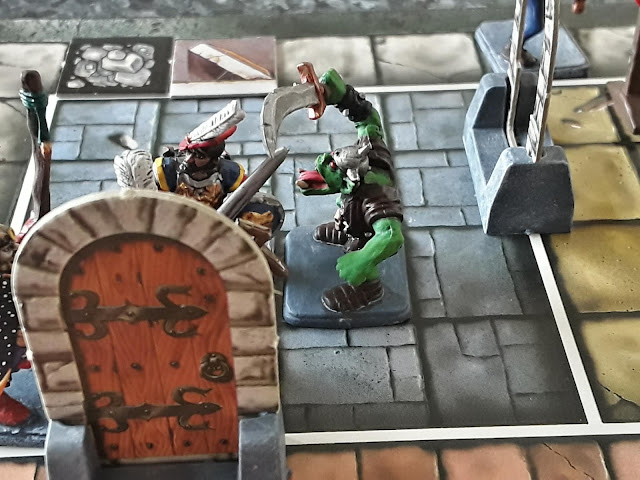 Sneeks pockets 40 gold from one of the newly painted treasure chests. I was finally driven to properly paint all my Heroquest furniture by some very cool threads over at Ye Olde Inn ( http://forum.yeoldeinn.com/viewtopic.php?f=56&t=4504&start=130 ). Thanks for the inspiration and tips Krautscientist! Sir Ragnar kills the wandering orc and is then healed back up to full health by Garmin's potion of healing. With all the party back together, the Heroes steel themselves for another fight, sensing that the Orc Warlord must be near. 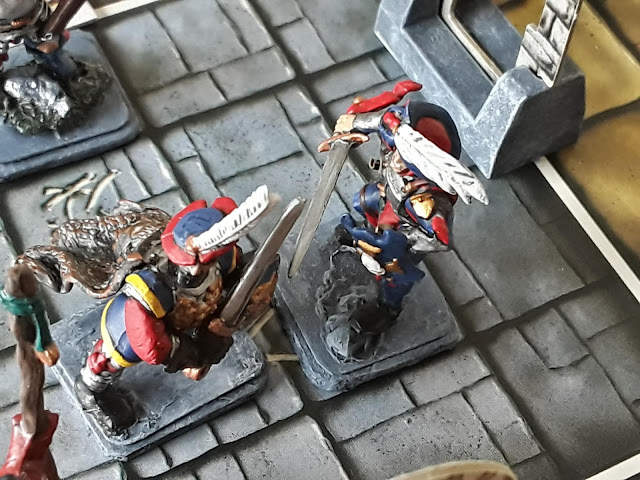 They weren't wrong. The mighty Ulag stands behind a chaos warrior and two orc minions. Morcar is feeling confident at this point that he should be able to kill off at least one of the Heroes, hopefully more.
But the dangerously wounded Wizard still has a few tricks up his sleep. Rather surprisingly, Zaphod is the first into the room, lodging himself into the corner and then casting Psychedelic Flash on the whole room, thereby blinding the monsters and preventing them from moving for one turn. We hadn't played with these Heroes for so long that I, as Morcar, had quite forgotten about this damn spell. 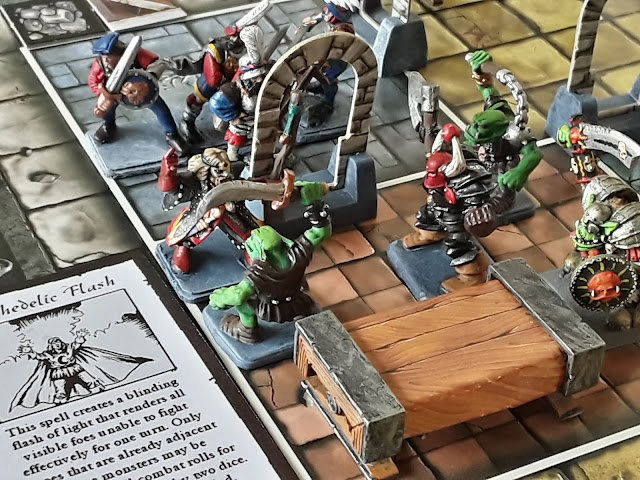 The move isn't wholly without danger, however, as any monsters already in contact with a Hero can still attack, albeit with one less combat dice than usual, due to be blinded by Zaphod's light sorcery. The orc rolls one skull, and once again the wizard has to roll at least one shield with two defence dice to stay alive...
...and Zaphod gets his shield, much to Morcar's dismay. 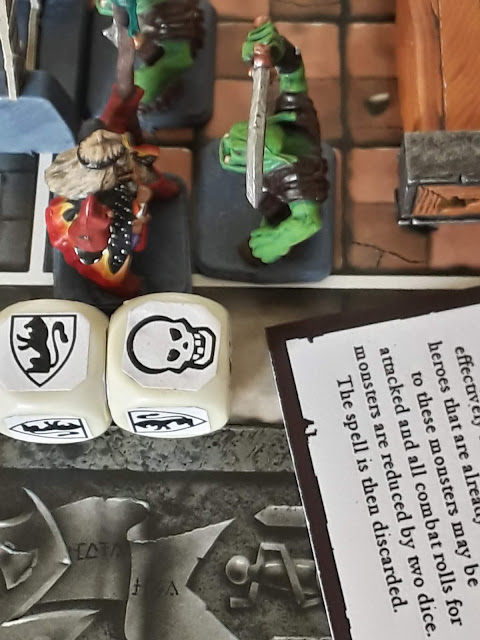 With the other monsters missing their turn due to being blinded, Sir Ragnar leads the attack on Ulag himself, somehow finding a chink in the Warlords heavy armour and causing one hit. 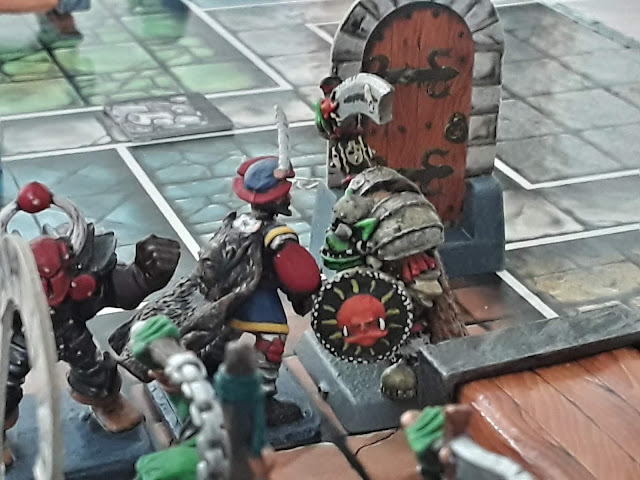 In another surprising move I didn't expect, Sarymoor had ditched his crossbow for the spear, and gulped down his heroic brew, allowing him to kill one of the orcs in hand-to-hand combat. At this point it was becoming a bit of a joke that we couldn't remember Sarymoor ever failing an attack roll, not only with his crossbow but now the spear as well. With this Hero developing a reputation as the most deadly in the group, Morcar makes a special note to try and kill this guy whenever the chance arises... 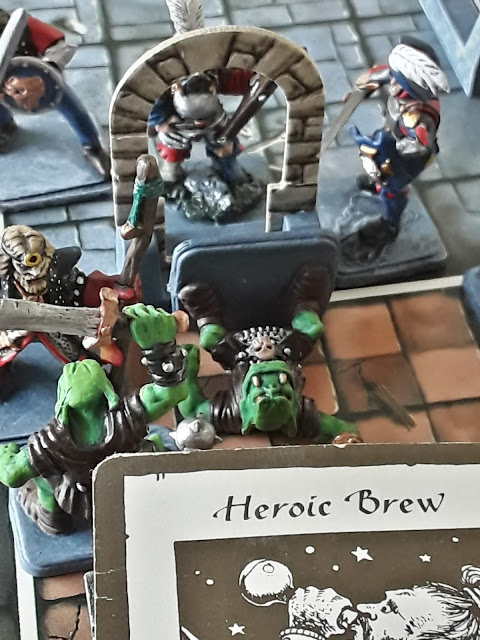 Sneeks confronts the chaos warrior but does no damage. Zaphod Swiftspell casts Vanish on himself, telling the other Heroes that his work has been done and that he's now going to sit out the rest of the fight. 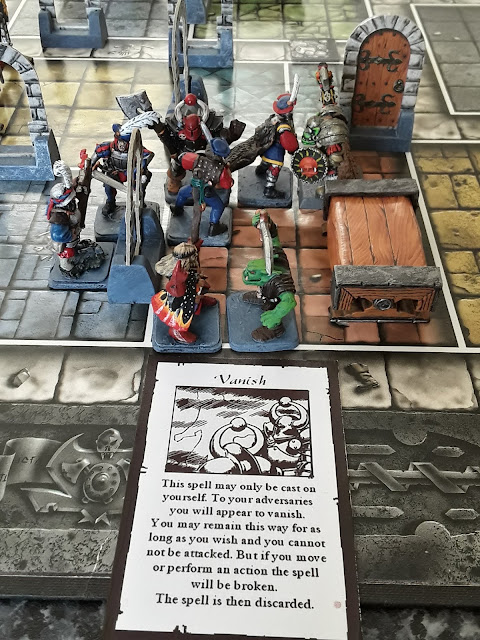 Ulag launches a vicious attack on Sir Ragnar, but the knight manages to roll a whopping three white shields and defends against all hits. The chaos warrior completely botches his attack on the veteran Imperial Scout. 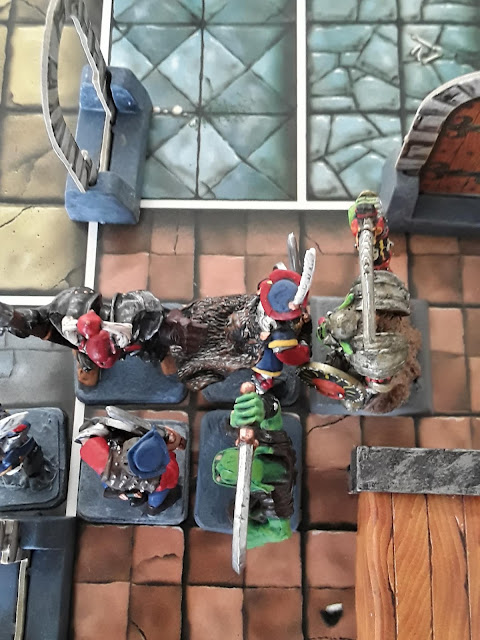 Victory for the Empire! Ragnar brings down the hulking Ulag with his next attack, and on the very same turn Garmin does for the last orc and Sneeks destroys the chaos warrior. Revenge has been taken for the defeat and imprisonment suffered at the hands of the Orc Warlord. 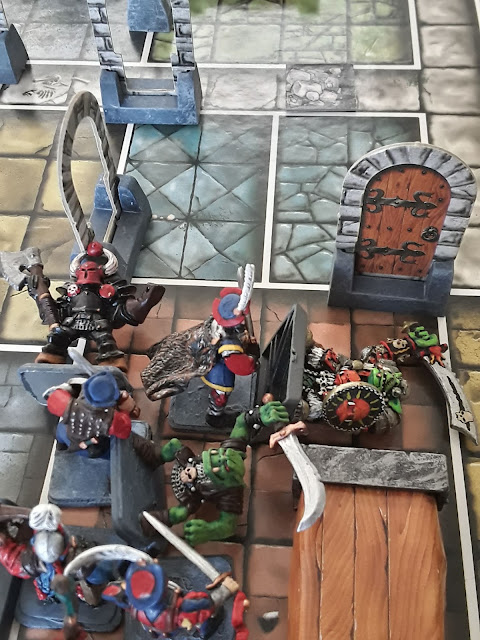 As if to reward his victory versus the chaos warrior, Sneeks finds his second chest of the day, gaining another 100 gold after first disarming a spring-loaded spear trap. 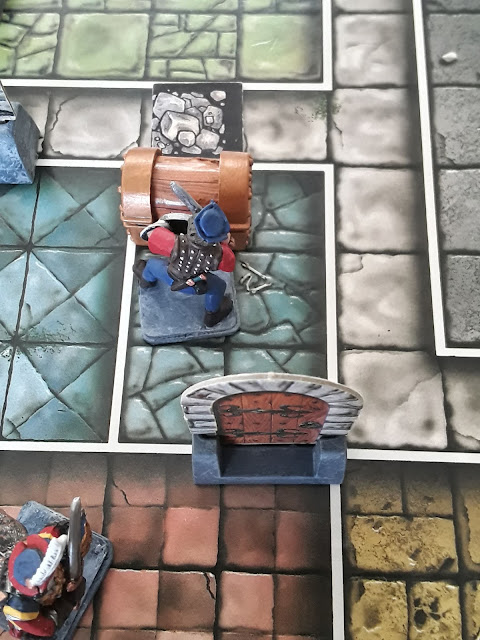 The final act is small matter of the 100 gold coin reward. Technically it belongs to Sir Ragnar as he was the one who killed the Orc Warlord, but being the responsible leader and all-round nice guy that he is, he decides to share it out equally - 20 gold for each of the 5 Heroes.

A fun quest! The changes worked pretty well I think. On the one hand Garmin, Sarymoor and Sneeks completed the quest with barely a scratch but the other two Heroes come close to getting killed. With hindsight I should have added some more orcs to the final boss room. I also have a few reservations about Zaphod's four Sorcery spells. These spells work really well to make Zaphod a good supporting character, but the Enchant Weapons spell is pretty powerful; the wizard has now worked out that he'll just cast this spell on the stairway from now on, right at the start of the quest, making all the Heroes very strong in attack throughout the entire quest. To counterbalance that, most of the Heroes have only 5 body points (only Ragnar with six has more), so if I add some more monsters to the quest I'll still have a chance to defeat them. I think I'll try one more quest with the current arrangement, before making any changes to the spells used.
Posted by Pancho at 01:44 2 comments: