"A guide has led you into a dungeon that is rumoured to hold a great secret. He has led you down many dark corridors and finally you find yourself in a room with three doors. Suddebly the guide puts out his torch and in the darkness you hear him laugh; 'Farewell my Heroes', he sneers as he makes his escape. You realise to your horror that it is a trap!
You must escape or perish in this dark forgotten hole".
Mentor


I did plan to run this quest with the alternative Heroes from Sir Ragnar's band of merry men, but as we're having trouble getting that gaming group together, the regular four Heroes will take on this adventure instead.


And what an adventure it was.


As the Evil wizard player I decided to add a few things to spice up the quest. The original quest is great, but it has no mechanic to make it seem like an actual race against time.
Firstly, I used this opportunity to introduce a deck of 'Evil Wizard cards'; if there are no monsters on the board on the Evil Wizard players turn, he may draw one of these cards and use it later. These cards make life more difficult for the Heroes, encouraging them to get through the dungeon quicker; the more doors they open, the more monsters they are likely to encounter, meaning Morcar will not get to draw any cards. Most of the cards have fairly minimal effects, although there are a few very devilish ones, and the psychological effect on the Hero players is great. I have two versions of this deck and they will be used from now on for every quest .
Secondly, a special rule for this quest only. On each Morcar turn, he rolls one combat die; on the roll of a black shield there is a rumble in the dungeon as the traitorous guide attempts to collapse the exit.
The stair tile was placed next to the board, and every time Morcar was to roll a black shield at the start of his turn, a falling block marker was placed on the tile. These falling blocks would begin to fill up the exit room, and if it was full of these once the Heroes eventually found it, they would be trapped forever...


Here you can see the Heroes stranded in the room with 3 doors. You can see the big stack of Evil Wizard Cards (or Room cards as they are titled in this case). The stair tile also stands by, ready to fill up with rubble. 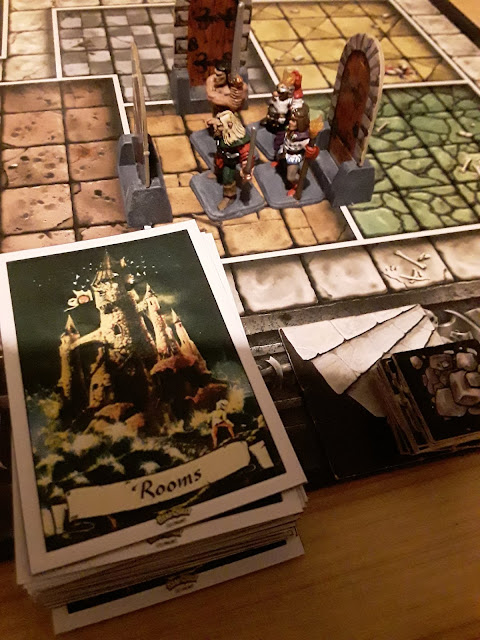 Mindful of their predicament, the Heroes opened all 3 doors on their first turn, revealing a small army of greenskins! Thankfully for them, the Heroes are feeling beefy after purchasing some equipment after the last Quest. The Barbarian bought a shield, the Dwarf a Helmet, and the Elf Bretal finally managed to get his hands on a crossbow. He was still 5 gold short of the price needed, but the Wizard gave him the cash on the understanding that the Elf would save his arse when the time came. The Wizard himself wears Borin's Armour after the last quest, and bought nothing. 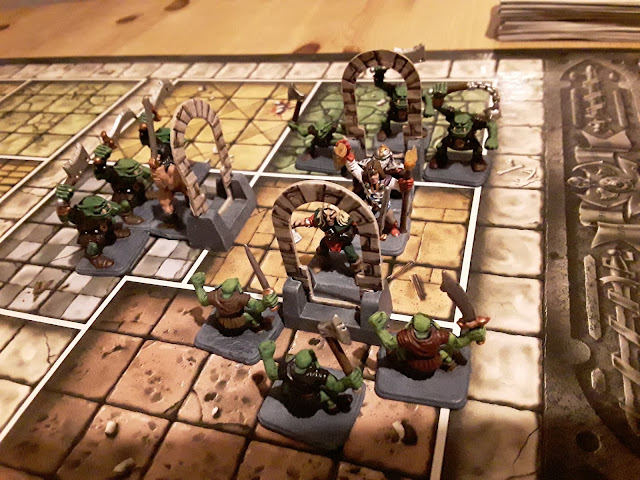 Each of the Heroes kill one adversary on their first turn. However, on Morcar's very first turn I promptly roll a black skull and the stair tile begins to fill up with rubble. The look on the players faces is priceless, as they now know that they are in a real life or death race. 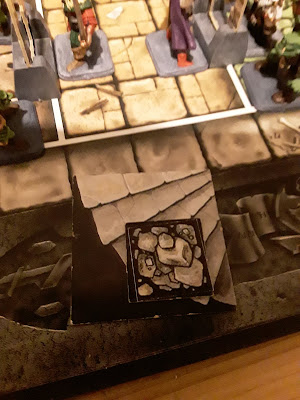 After a lively exchange the Heroes clear the rooms of greenskins, but at some cost; Rend the Barbarian losing five (!!!) Body Points and the Elf losing two. In the frenzied search for a way out of this part of the dungeon that followed, Bretal also lost another wound from an arrow trap. After finding no secret doors in any of the three rooms that held the monsters, the Dwarf finally realises that the secret door was in the first room all along. The Heroes were not impressed that they didn't even need to open any of the three doors in the first place! I have run this quest many times, and nobody ever seems to check the first room for another way out! 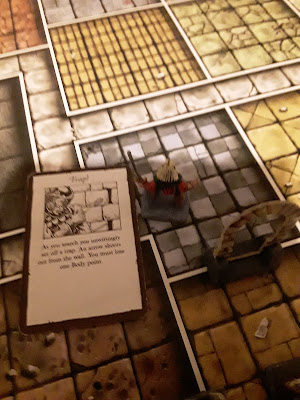 More orcs around the corner. Rend slays one and Bretal skewers the other with his new crossbow. However, after the fiasco earlier when trying to find the secret door, Morcar has managed to draw a number of Evil Wizard cards, ready to use against the party at the right moment. 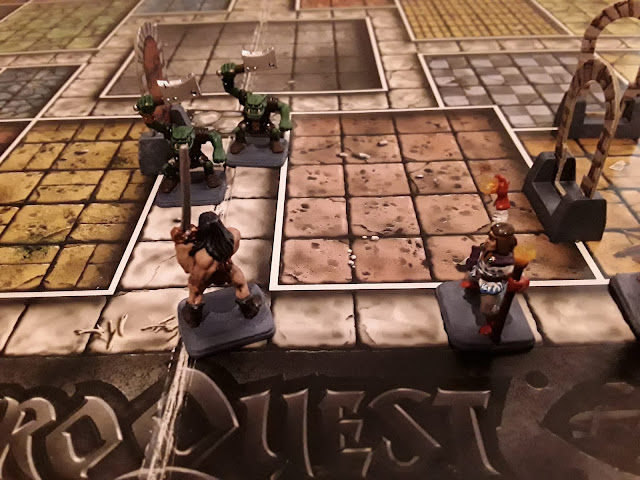 Merkai uses Swift Wind to hasten his passage along the south corridor, desperately trying to cover the ground and find a way out. 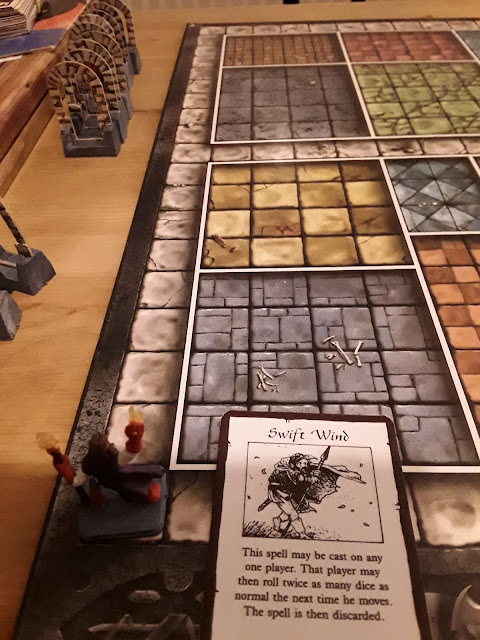 But that's not all; Morcar uses his first Evil Wizard card - Hallucinations. Rend has disturbed a cluster of magic mushroom spores, and loses one mind point. He only had two to begin with!
As if groggy from the 'shrooms, Rend completely fluffs his attack on the Chaos warrior.  The Elf and Dwarf, however, are unaffected by the spores and each kill a goblin. Merkai the Wizard, sensing that his Barbarian friend is in dire trouble (he could have been killed at this point if the Chaos Warrior rolled well), casts Fire of Wrath on the creature of chaos from a distance, incinerating it. 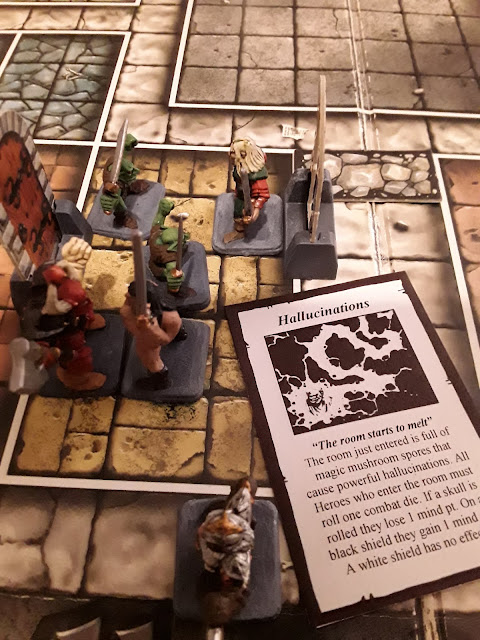 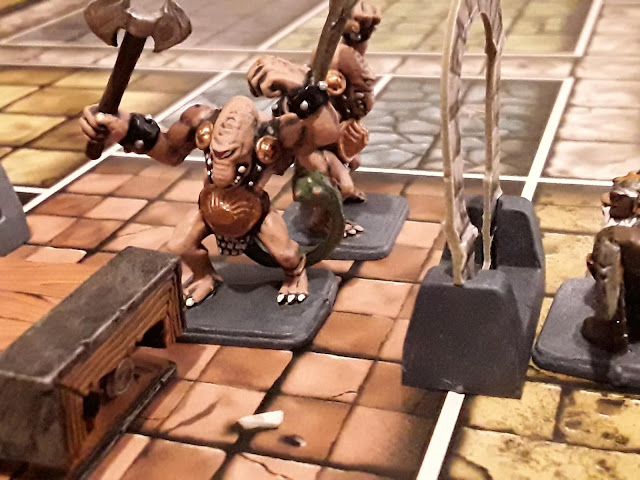 One of them is furious that he has been disturbed and goes into a Frenzy (courtesy of another Evil Wizard card, allowing it two attacks in the same turn). Grimgold attacks the creature and misses completely, but Merkai comes to the rescue again, this time casting Genie on the frenzied Fimir. The Genie rolls 5 attack dice and rolls 5 skulls, ripping the Fimir to shreads.

Suddenly there is a crescendo of noise as another heap of rubble is collapsed into the dungeon exit and another fallen block marker is added to the stair tile. As the dust settles, Bretal reluctantly decides to use his Heal Body spell on the Barbarian. The players have come to the conclusion that they need the Barbarian, their best fighter, fit and healthy if they are escape this place. 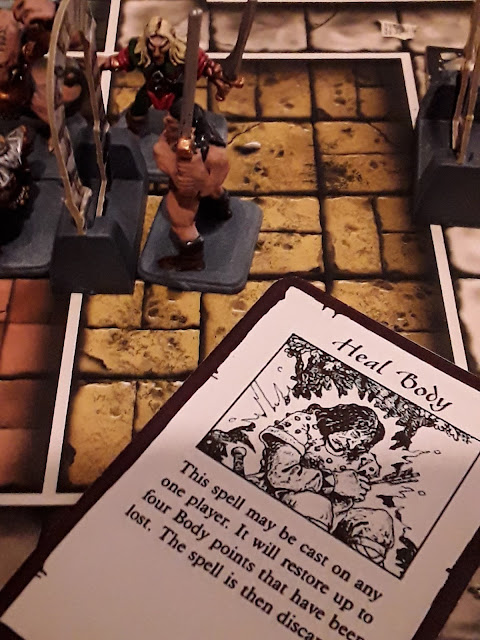 Rather unhelpfully however, the Barbarian finds a stash of gold coins hidden here and there around a fireplace, and misses a turn. The last thing the party needed really. 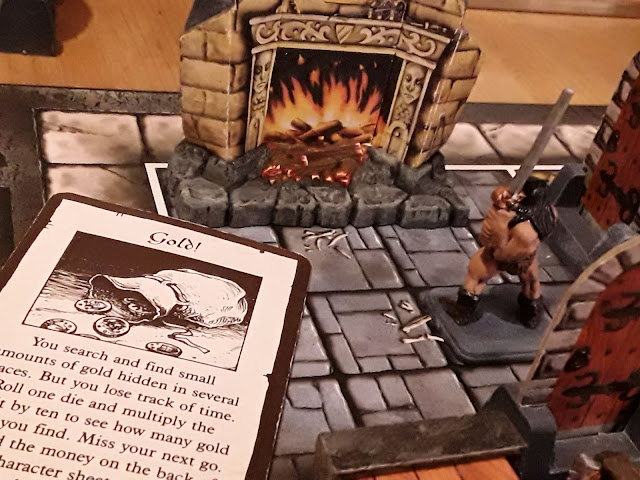 Bretal finds two treasure chests in the next room. However, Morcar uses an Evil Wizard card that causes the Elf to slip and fall into a disgusting pile of excrement. From now on no other Hero is permitted to stand immediately next to the foul-smelling Hero. This was a very funny moment, not least because it happened to the haughty, fancy-pants Elf.
The humiliation is forgotten quickly when Bretal finds 100 gold in the first chest. 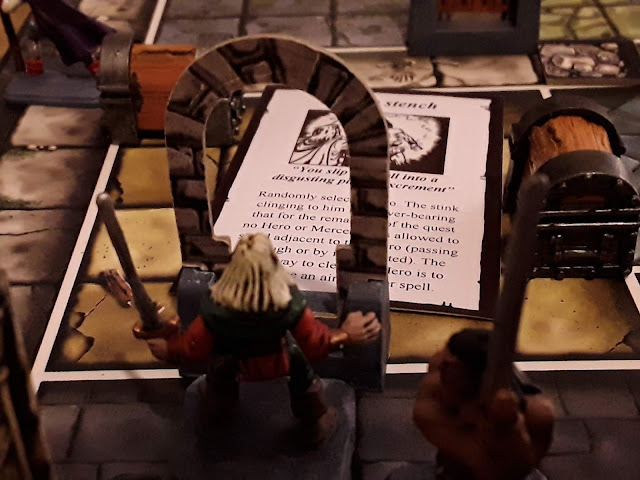 Merkai continues his scouting mission alone. A risky tactic considering that he has used many of his offensive spells helping the other Heroes. Thankfully he still has a Sleep spell handy to use on this orc. As the Orc slips into unconsciousness, there is another loud rumble as a the guide tips more rocks down the exit stair. Time is running out! 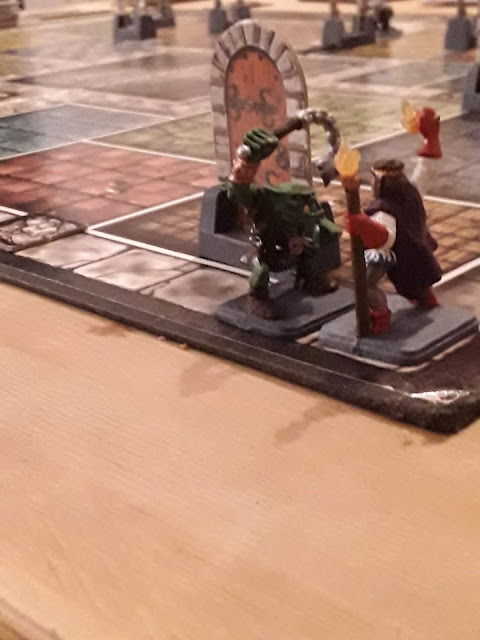 The Elf seems unconcerned. Whilst the Barbarian and Dwarf backtrack to catch up with Merkai, Bretal lingers to pillage the second treasure chest. Another 100 gold! 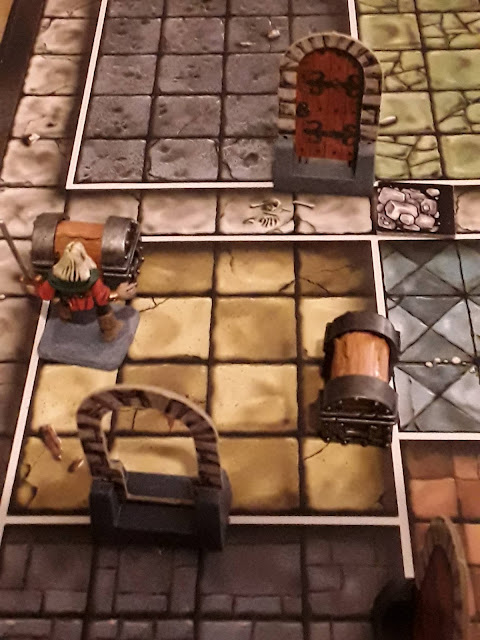 A close up of the Unholy Stench card. 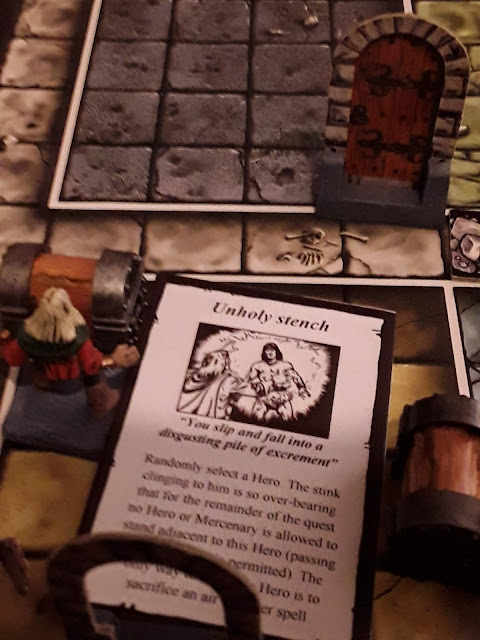 Merkai continues his solo expedition, finding a nest of goblins, but can't attack them thanks to another Evil Wizard card - the Hero becomes lost in a powerful vision of his eventual death, cast by Morcar himself). To make matters worse, the treasonous guide collapse more stones down into the stairway. The sound is much closer now, and the Heroes know they are close to the exit, but will it be too late? 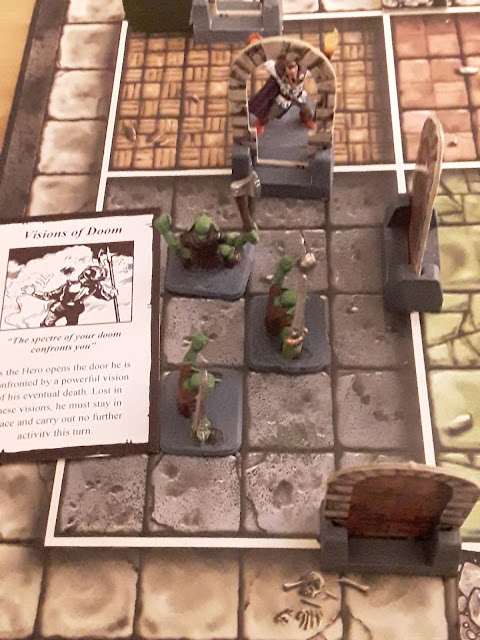 Merkai kills two of the goblins in hand-to-hand combat, losing some Body Points in the process. However, the Sleep spell wears off and the orc gets back to his feet. The last thing it remembered seeing was a skinny human wearing a silly purple costume making weird hand gestures in front of its face, and it now wants some payback. 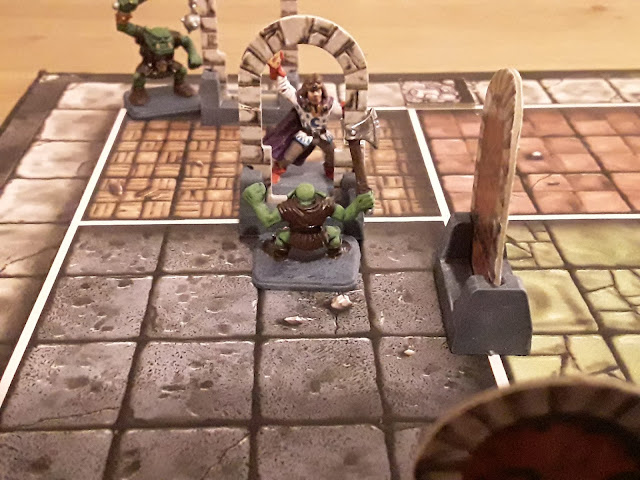 Grimgold's stumpy little legs have finally caught up with the Wizard. Seeing that Merkai seems to be having no problem with the remaining goblin, the Dwarf opens the other door and finds the exit! There is a lot of rubble in the room, but the stairway is still open! 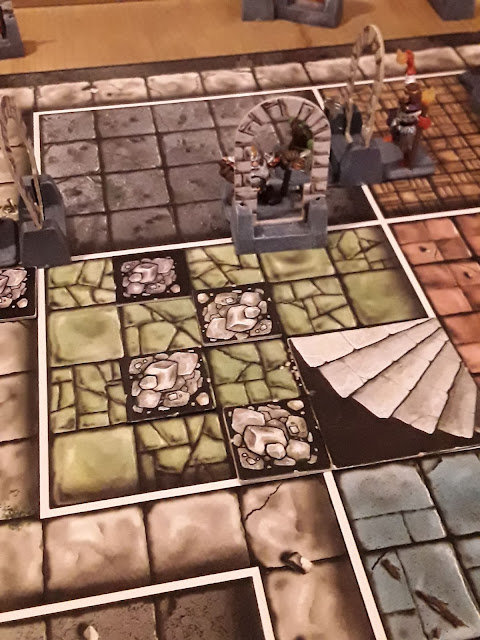 Merkai, quite badly wounded, decides to take no chances with his attack on the last Goblin and casts Ball of Flame at it, hoping to simply step over its charred corpse to safety. Incredibly, however, the Goblin rolls two black shields in its defence roll against the spell, and survives. An anguished Wizard now faces a great chance of being killed from the attack of both the Goblin and the Orc. The Goblin takes one Body Point, leaving Merkai with just one more (and no healing potions). The orc then rolls two skulls and the players suck in the breath...Merkai rolls two white shields thanks to Borin's armour, and survives the attack. The vision of his own death that he saw earlier was after all from another time, in another dungeon... 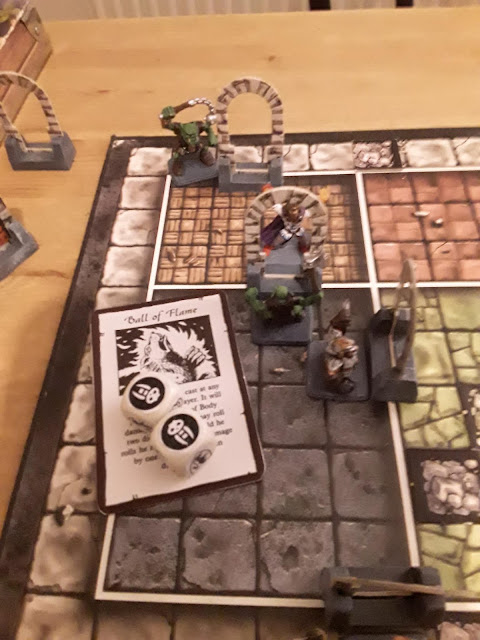 The Heroes kill the last monsters and exit the dungeon. The guide has slinked off into the night and cannot be seen. These are not the kind of Heroes to forget such treachery, however, and they vow to track him down. But that's a story for another day... 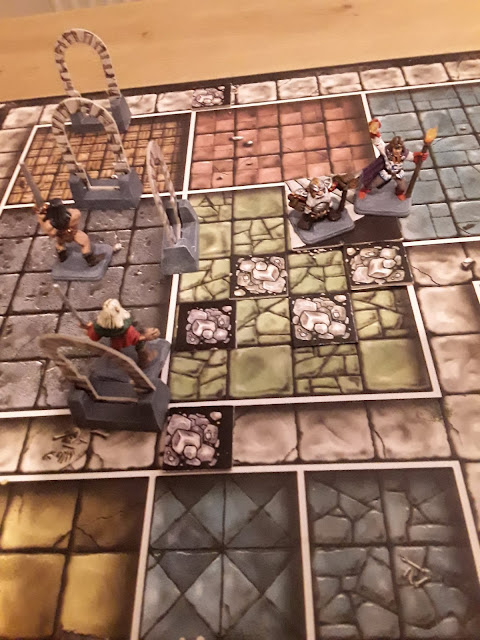 That was a great quest. The Evil Wizard cards really added to the game, and the collapsing stairway was a great mechanic too. The Heroes were never in great danger from it, but it felt throughout that they were. Somebody at the Inn came up with that excellent little rule, but I can't remember who. Thanks anyway!