"Long ago a crazy wizard, Ollar, discovered the entrance to a gold mine. Using his great powers he built a magic castle above the mine to protect it. The castle had many magic portals and was guarded by a host of monsters who were trapped in time. Can you find the entrance? Others have tried, but the castle has thwarted them every time".
Mentor


I was in two minds about whether to run this Quest or not. I have bad memories of playing this as a kid because we got stuck in the Castle and it became a bit boring trying to roll dice just to get out. Each time a Hero moves through any door, they are randomly teleported to another room in the dungeon based on a dice roll, meaning that the entrance can be very hard to re-find.
On the other hand, a number of people say this is actually their favourite quest because it's just so different, and it separates the Heroes from each other really well.
So I decided to run a modified version. Firstly, I decided to use tiles form the D&D Adventure Boardgame that I had already printed off. As the rooms in the Castle of Mystery are separated off from each other by magic portals and normal movement is prevented, there was no reason to use the standard HQ game board, especially seeing as I had a nice alternative sitting around.
Our set up is shown in the first photo. As you can see, the rooms are much bigger than usual for Heroquest. 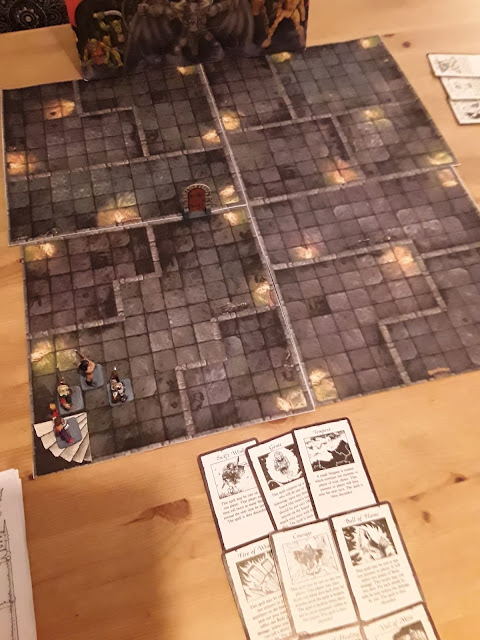 Secondly, I tweaked the dice roll so that it would be a little easier to escape from the Castle. A Hero would teleport back to the stairway room on the roll of 2 or 7 on 2D6 (rather than on a roll of 2 or 12 like in the official Quest). One of the few things that has stuck in my head from school is my Maths teacher once telling us that the probability of rolling 7 with two six-sided dice is higher than for any other number!!!
I also made sure that the magic artefact Ring of Return was hidden somewhere in the Castle, as per the US version of this Quest. In a decision that would have a big impact on events, I also decided to add more monsters (and some furniture) to the map. As the rooms were much bigger I felt like they needed to more 'stuff' inside, not realising just how deadly the dungeon was about to become...


The Quest
The four Heroes move off the stairway, finding a long corridor leading to the first door. 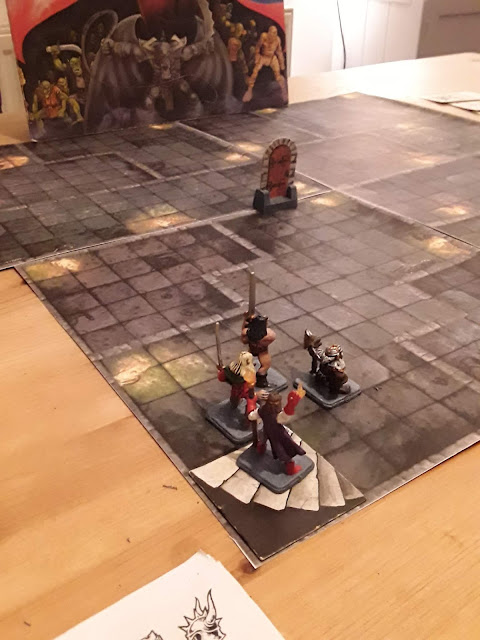 Rend the Barbarian finds a Treasure Hoard on his first search. This stroke of luck so early on made me slightly feel better about the storm the players would face for the rest of the Quest.
Another unusual feature of this adventure is that it has no traps or secret doors at all. 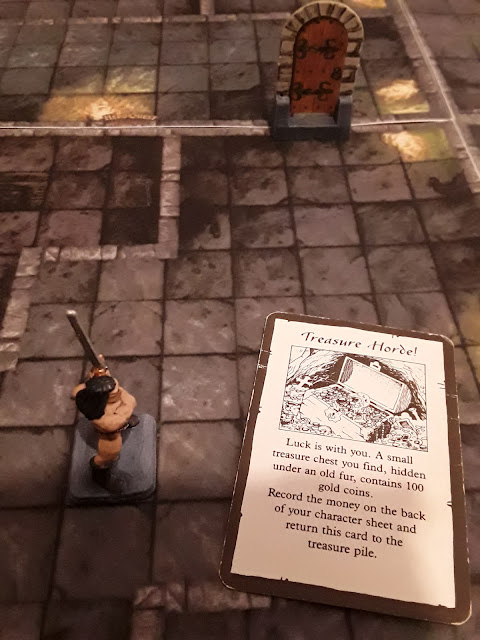 Rend was also first to go through the first door, and was surprised to find himself teleported into a room full of undead creatures. With little movement left, and confused by the teleportation, he elects to stay in the doorway and wait for the creatures to attack. 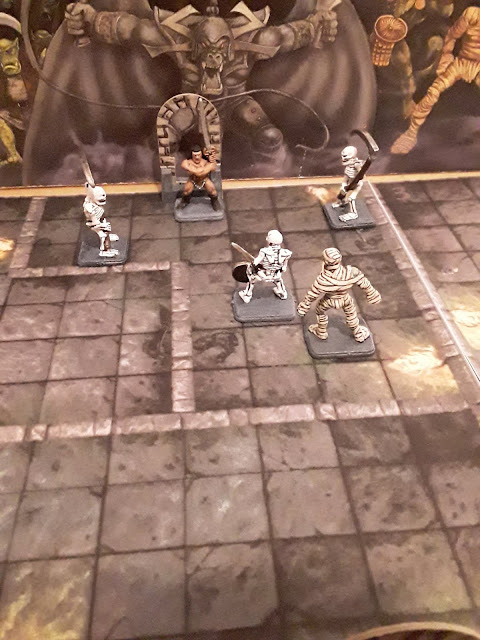 Bretal the Elf jumps through the portal door fearlessly, and ends up in another room of undead monsters. Unlike the Barbarian, he his equipped with a ranged weapon, and manages to destroy one of the skeletons with his crossbow. 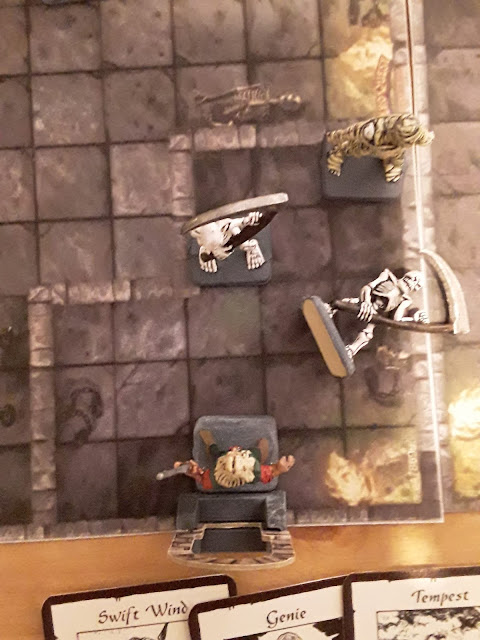 Grimgold the Dwarf can't believe his luck as he finds the entrance to Ollars gold mine with his very first teleportation roll! 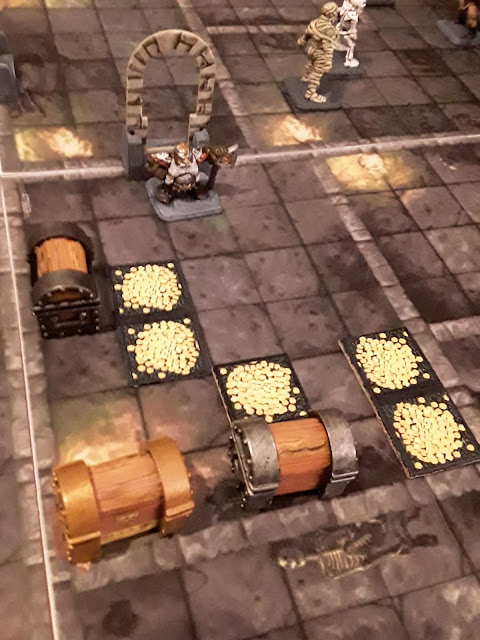 Merkai the Wizard isn't so fortunate, chancing upon a horde of goblins. They grin menacingly as they realise that the Wizard is alone, and apparently easy pickings. Unable to retreat back through the portal, Merkai casts the spell Courage on himself, and waits for the sea of green to envelope him... 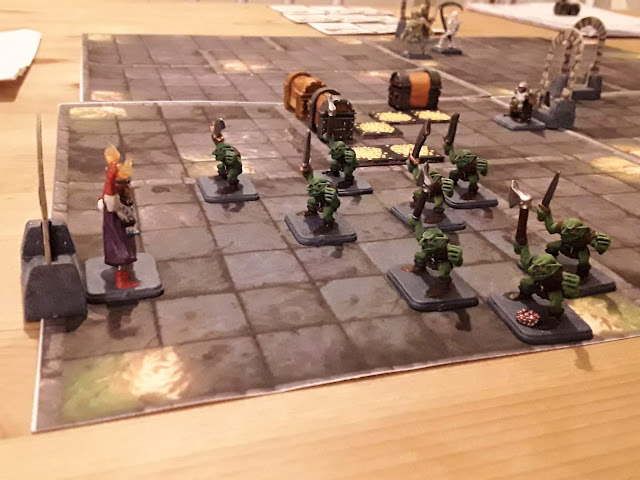 On Morcar's turn, the forces of evil charge to attack the Heroes. The Barbarian, Elf and Wizard are all wounded by the storm of blades coming at them. 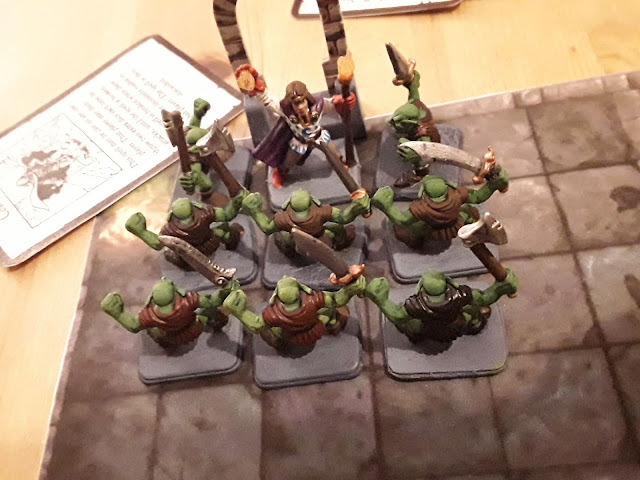 Meanwhile the Dwarf chuckles to himself as he picks up one of the chests, stuffed with the massive sum of 5000 gold coins. The smile disappears as he is informed that whilst he carries the chest he won't be able to attack or defend himself! 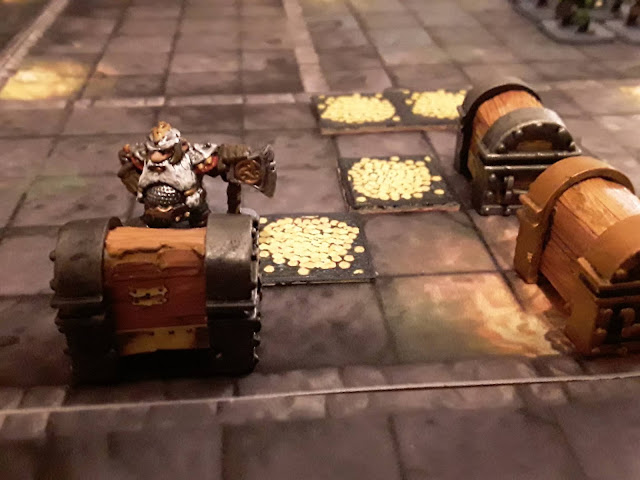 Rend defeats one of the skeleton's and retreats to the other end of the room, his warrior instincts figuring that the slow moving monsters won't be able to easily reach him there. The Elf copies his tactics from the Barbarian and also retreats, wounding the Mummy in his room with his crossbow. 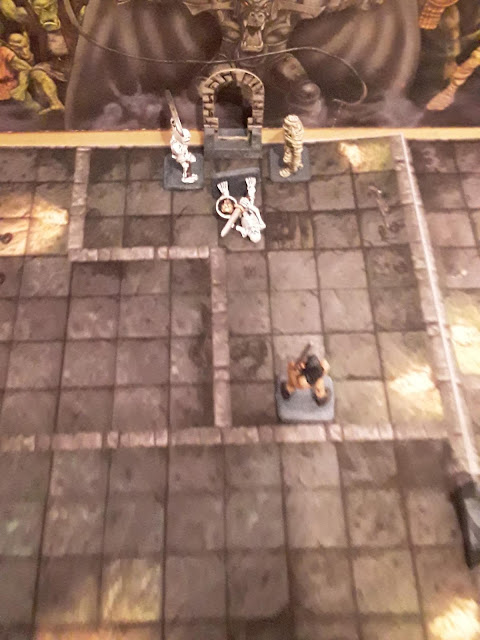 Grimgold drags his heavy treasure chest through a portal door, only to find two fearsome chaos warriors. He can only defend himself if he drops the chest, but true to the nature of Dwarves he refuses to do so. When the attack comes, the chaos warriors deal a massive 6 hits, leaving Grimgold with just one Body Point. With no healing potions and no friends in sight, he is now in serious trouble... 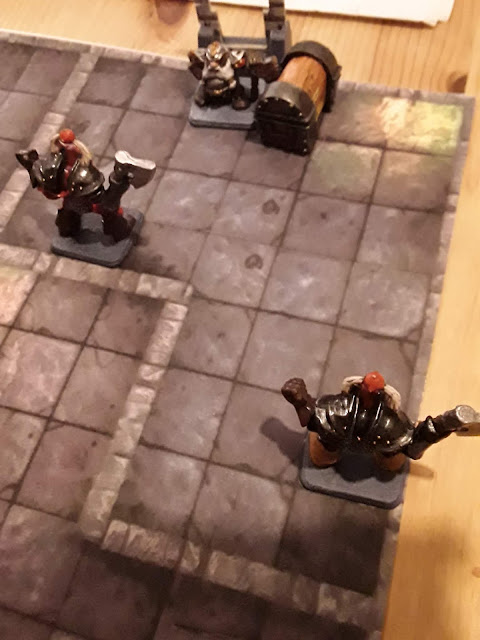 Meanwhile, the Wizard has slain a number of goblins, aided by Courage and Borin's Armour. But he realised there were just too many to fight alone, so he steps back through the portal. Teleported to a new room with just one chaos warrior, Merkai burns it to death with Ball of Flame. However, with no more monsters in view, his Courage spell is ended. 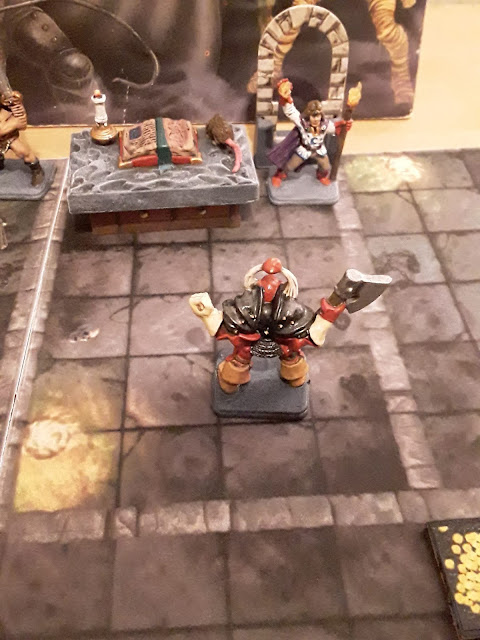 Grimgold's first moment of fate; after fleeing from the chaos warriors he has teleported into the room with the Barbarian and the undead. The Mummy lurches after his foe the Barbarian, whilst the single skeleton attacks the Dwarf. With only 1 BP left, Grimgold has no choice but to let go of his treasure chest if he is to defend against the attack, and the chest magically disappears back into the depths of the Castle! The skeleton then rolls two skulls, meaning the Dwarf requires two shields just to survive, but he rolls very well to get what he needs. 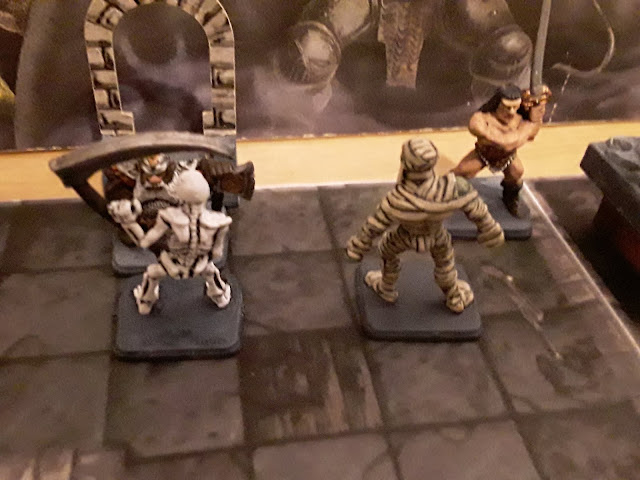 After tiring of fighting undead (the Mummy he faced kept rolling black shields), Bretal leaps through a portal door and lands amongst the Goblins that the Wizard had been witling down. He casts Rock Skin on himself to try and improve his odds. 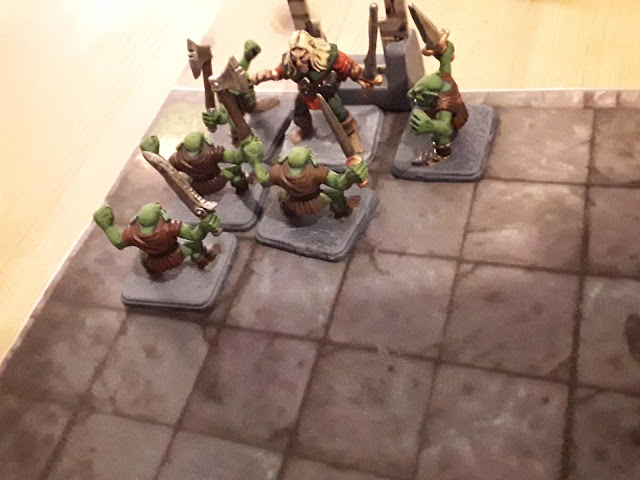 Grimgold slays the skeleton whilst the Barbarian takes out the Mummy. Grimgold doesn't know it yet, but whilst he stays in the doorway he remains in mortal danger; the Quest rules state that if a Hero teleports into a room and there is another character in the doorway, that character loses 1 Body Point! 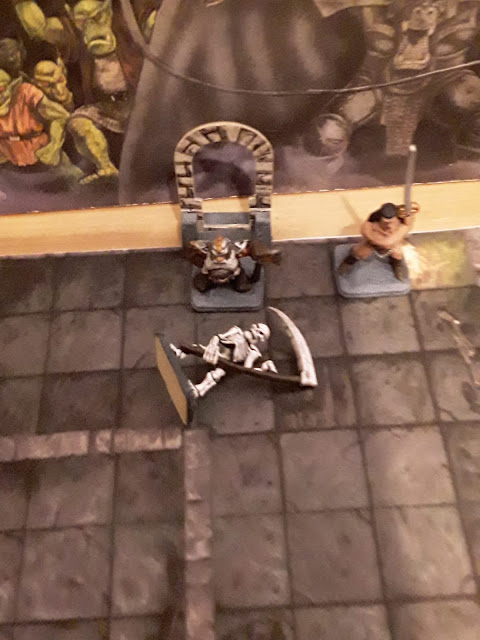 Out of the frying pan and into the fire? Bretal retreats from the sea of goblins only to find a room with four orcs. A calm shot with his crossbow launches one of the orcs backwards into the fireplace, but there are still three more to contend with. 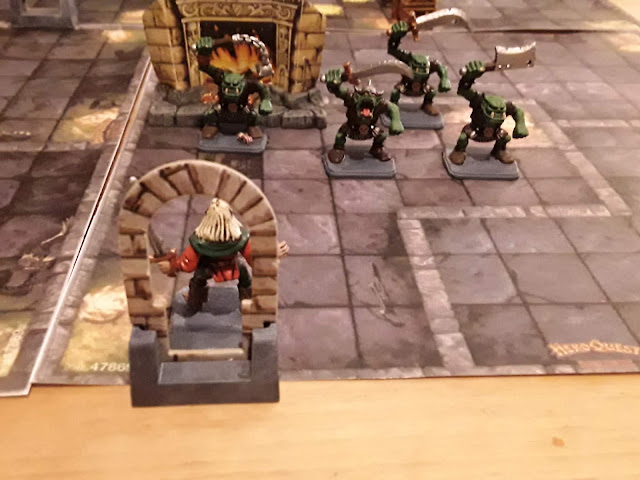 Meanwhile, the Wizard is having a great time in the Castle of Mystery. Not only did he find a Ring of Return on the sorcerer's table, guaranteeing his escape back to the stairway at his leisure, on the very next turn he find's the entrance to the Gold Mine and helps himself to another chest of 5000 pieces. 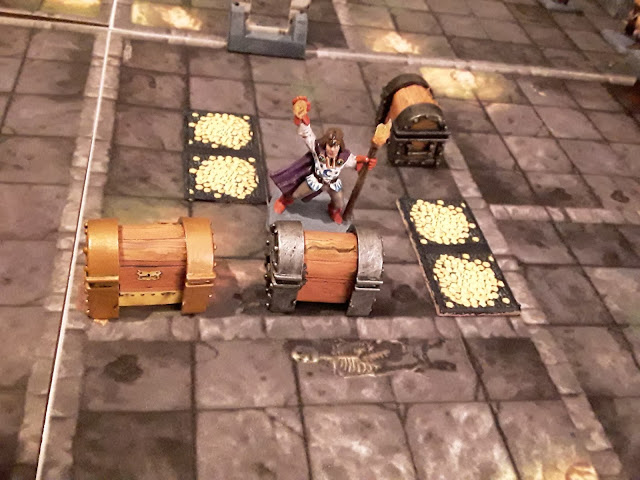 More perilous times for the Heroes; even with his Rock Skin, the Elf suffers from the furious orcish attack and is left with just one body point. Bretal then used up the last healing spell in the group. At this point, as Morcar, I'm beginning to think that I might get a total party kill. 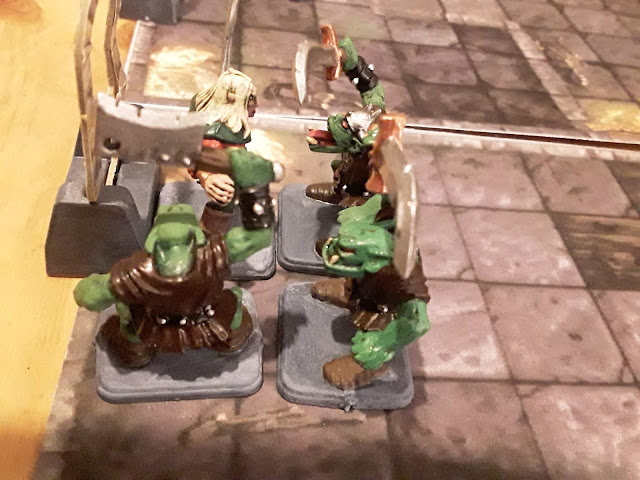 The Barbarian teleports to the other room of undead, whilst the severely wounded Grimgold has no choice but to stay behind. Rend finally brings down the second Mummy, it's incredible run of black shields failing at last. 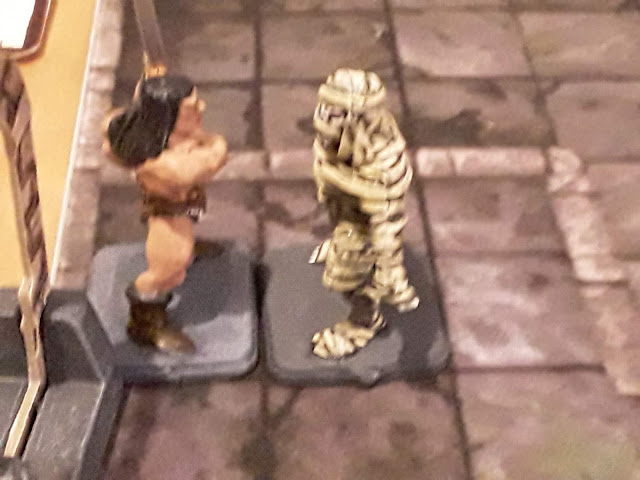 The Heroes fortune begins to turn, with Merkai teleporting to the same room as Grimgold. By pure luck, the Dwarf had wandered into the room (out of sheer boredom really, as the room had already been cleared of monsters and searched for treasure & traps), and narrowly avoiding the ignominy of people killed by another Hero landing on top of him! That would have been too funny for words. For me at least. 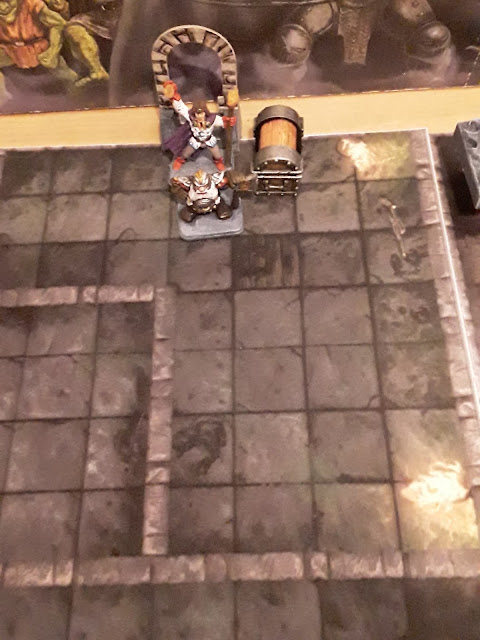 The Quest then ended rather abruptly. After a rather harrowing experience for the players, Merkai used the Ring of Return to magically move both himself and the Dwarf back to the stairway... 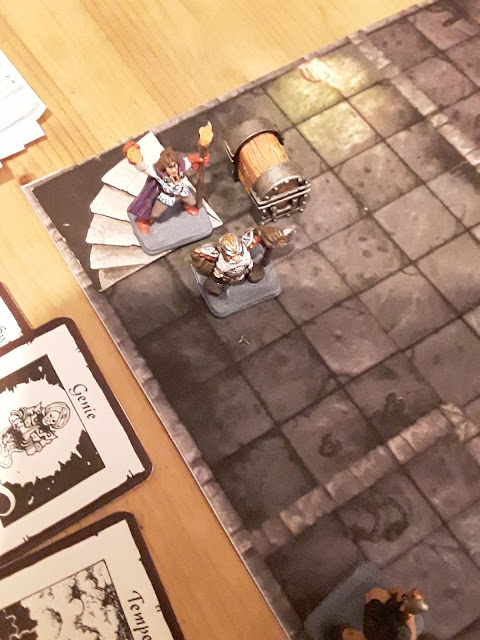 ...whilst the Barbarian rolled a seven and also got back to the start room.
That just left the Elf, who cleverly used his last spell Pass through Rock to escape as well. 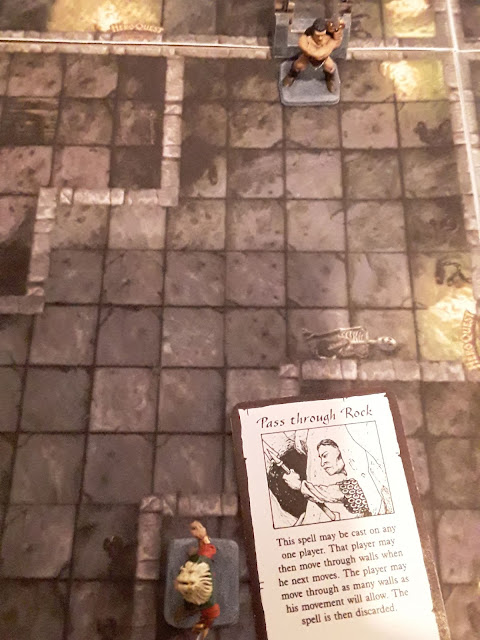 A this point I informed the Wizard that Ollar's treasure had been fools gold after all, and completely worthless. Needless to say the players were a bit miffed at this, having come so close to death essentially for nothing (the Barbarian's 100 gold from the first room being the only loot plundered, seeing as the Ring of Return was used almost as soon as it was found). I asked them to look on the bright side, as they were one Quest closer to becoming Champions of the Empire, to which the Elf spat out that he was outlawed and could never become a Champion anyway! What could I say to that?!?


Below is a photo of the board at the end of the game. How did it go? Well, the new game-board did look pretty good, and the large rooms may have actually saved Hero lives; although I couldn't resist the temptation to stuff them with more monsters, the extra space allowed the players to retreat out of the way of them at key times. Coupled with the decision to include the Ring of Return and to have the stairway found on a 7 rather than a 12, this all meant that the Heroes survived by the skin of their teeth. They came up with some very clever tactics and I would have disliked to see them wiped out because I made the Quest too hard. In the end the changes I made for to the Quest meant that it was just about balanced. Just. 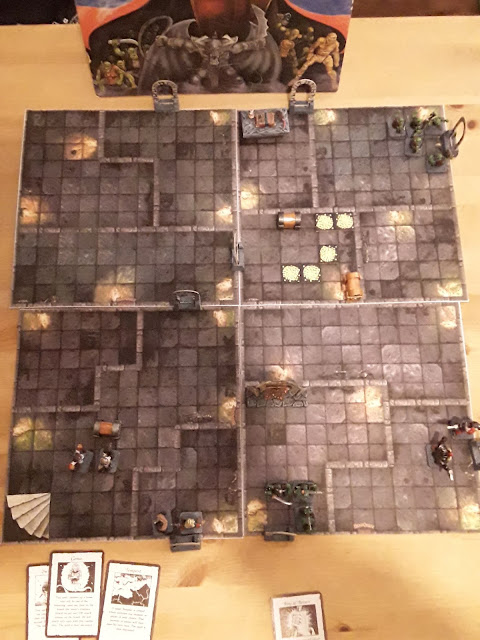