"Three Treasure Chests have been stolen whilst being taken to the Emperor. A reward of 200 gold coins has been offered to anyone who can return the chests and ALL the gold. The thieves are known to be a band of orcs hiding in the Black mountains. They are led by Gulthor, a Chaos Warrior".
Mentor


Prince Magnus' Gold is not the next quest in the official booklet but we won't play The Rescue of Sir Ragnar just yet, for reasons that will become obvious later. I should say as well that I have subtly changed pretty much all the official quests in one way or another. For example in this quest the three treasure chests were originally all located in the same room; I've split them up into different locations, which should make this Quest play better and increase its difficulty. As in the last quest, the heroes at this stage will be competing with each other for the spoils.


Here are our intrepid Heroes ready for their first proper adventure. As they descend the stairway into the dungeon Merkai the Wizard cheerily states that he hopes for more of a challenge after the "easy" Maze that Mentor sent them to last time. The other Heroes are not impressed with his bravado and ego, especially since they lost out on the gold prize on that quest.
They have the same spells as before with Bretal the Elf taking the Earth spells and Merkai taking Fire, Air and Water. 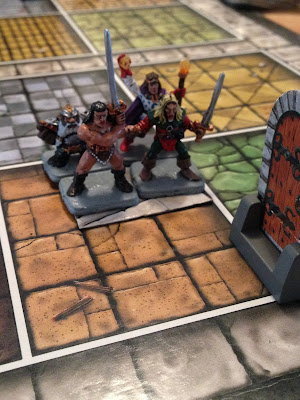 No equipment has been purchased. I've actually increased the cost of most items in the equipment card deck, to slow down Hero development. A shield for example now costs 200 gold coins.
Humuncules the Barbarian opens the door and discovers two goblins in the next room. He kills one, the Elf runs in and fells the other. A pretty good start.
The Wizard lags behind in the first room in order to search for treasure and finds 25 gold coins. the other heroes eye him with annoyance.
Bretal then opens the next door, finding a long corridor with two more goblins at the far end, this time they are armed with short-bows! He decides that discretion is the better part of valour and doesn't venture out into the corridor just yet. 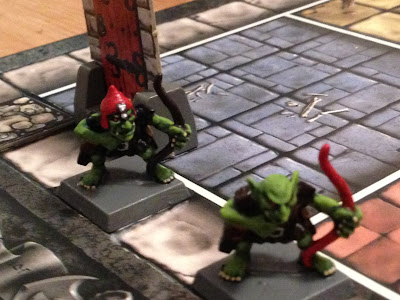 Grimgold the Dwarf bullishly moves out into the corridor but can't hope to cover the distance to the goblins. Merkai follows him out and casts the air spell Tempest on one Goblin, meaning that it will miss its turn. This goes some way towards earning back a bit of respect from Grimgold.
The other Goblin moves past his ensorcelled mate and opens fire on the Wizard, but misses.
The Elf finally ventures out into the corridor after casting the earth spell Rock Skin on himself; that will give him some extra protection from the arrows coming his way on Morcars' turn.
The Barbarian finally catches a pesky goblin archer and kills it. Grimgold takes down the other one but the archers have taken a toll; Bretal and Grimgold both losing 2 body points! The archers were a very nasty addition to the quest, and the heroes are now very wary of what might lie ahead.

Bretal enters a room at the end of the corridor with a table and two orcs in it. He fails to do any damage and the Heroes are cursing the fact that they don't have better weapons. 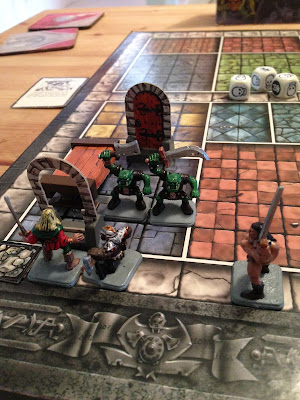 Merkai uses a water spell and puts one of the orcs to sleep. He's holding back his powerful fire spells for later. The other orc fails to wound Bretal, who slays him with a skilful reposte with his short-sword. Humuncules slays the other orc whilst he sleeps!
Grimgold finds another orc in the next room but fumbles his attack. He doesn't seem to be faring well today. Bretal ignores his call for assistance and decides to stay and search the table in the previous room for treasure, promptly triggering a trap and going down to just 3 BP. Grimgold then loses another BP to the orc, and growls in mounting anger. Humuncules destroys the orc however, rolling 3 skulls and taking its head off with his broadsword. Merkai then finds 50 gold in the room; he seems to have a lucky disposition. 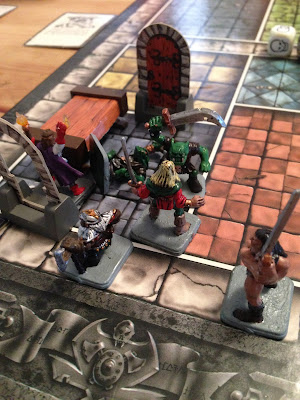 The Heroes move into another corridor, with the dwarf disarming a pit trap. Due to the linear nature of the quest so far the heroes have been working quite well together, but with the choice of two doors presented by the corridor, they split up; Elf & Dwarf moving south through a secret door, Barbarian & wizard moving north. There are a number of traps in this central area, and Humuncules also triggers a wandering monster (another orc). Merkai goes the long way round to take this orc from the rear, but misses and takes one wound from the orc for his efforts. Humuncules then kills the orc and Grimgold disarms another pit trap, but the party is looking quite low on health at the moment. Thankfully Bretal finds a timely healing potion. 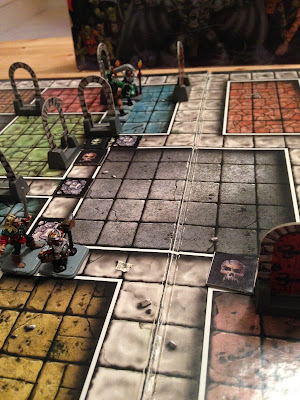 Grimgold opens a door and is presented with quite a sight;  A goblin, orc and a larger one-eyed monster known as a Fimir, all guarding a treasure chest. He attacks the orc but misses again. Bretal does manage to slay the goblin however. The ferocious looking Fimir retaliates and takes 2BP from Bretal. As he is on just one body point now he gulps down the restorative liquid of his healing potion. 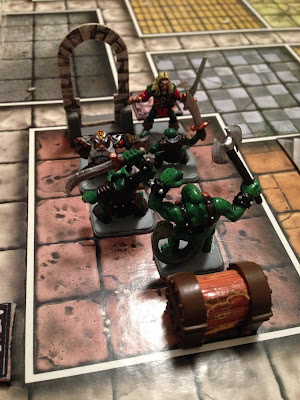 Merkai detects a secret door. Humuncules pushes it open and finds another of Prince Magnus' treasure chests. Unfortunately it is guarded by four monsters, including another Fimir.
The Barbarian, undaunted, enters and wipes out a goblin. Merkai decides not to enter as his plan is use the Barbarian as a shield and heal him with a spell if he gets low on health.
On Morcar's turn the dwarf loses 2BP from the orcs' attack (he's now down to 2) and the barbarian loses 2BP to the Fimir (he's now down to 4). 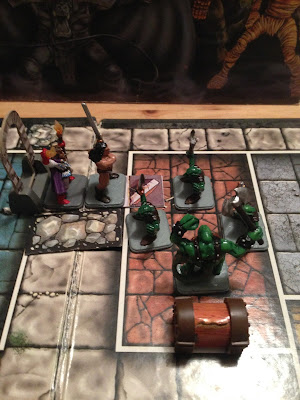 With a roar Humuncules smashes down the Fimir in one attack, which is no mean feat considering that Fimirs have 2 body points, unlike anything else they have come up against so far. On his next turn he kills the last goblin. Merkai the wizard tries to then enter the room to take the chest, but the indignant Humuncules refuses to let him past (he did all the fighting after all). The sneaky wizard uses the water spell Veil of mist to sneak past and claim the chest anyway! However, the barbarian still blocks the door and looks murderously at the wizard and the treasure. Merkai offers he heal him with a spell, cheerfully adding that there is still one more chest in the dungeon for Humuncules to discover. The Barbarian grudgingly agrees to this, but can't help feel a bit manipulated. Once again greed is overcoming heroism..... 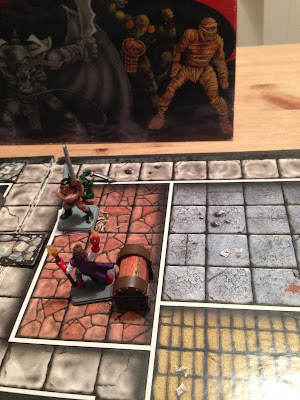 After a tough fight in the other room the Elf and dwarf mage to take down the other Fimir with combined attacks. Grimgold is however down to 1BP. Bretal picks up the treasure chest then promptly casts Pass through rock on himself and heads back to the stairway using a magical shortcut. Nicely played!
Merkai uses the air spell Swift wind to speed his own escape from the dungeon with the heavy treasure chest. It's good to see the heroes making full use of their spells. 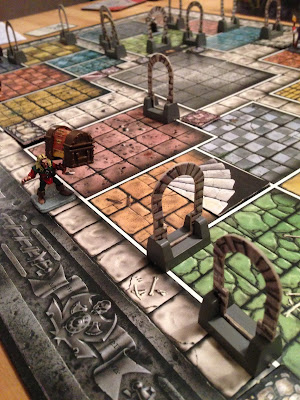 The barbarian, after a long trek around the top right corridors, opens a door to a room with 3 orcs (and no treasure chest). Grimgold treks after him, not sure if he can help much in the mission to find the 3rd chest with only one body point left. To make matters worse he remembers that the elf  had a healing spell that could have beefed him up, which will now get no use as Bretal has already escaped the dungeon. Grimgold's list of grudges grows longer.
Merkai does however help the barbarian from afar, slaying an orc with Fire of wrath. Humuncules slays the other two for no loss to himself. He finds 50 gold in the pockets of the dead orcs, as a reward for his efforts. 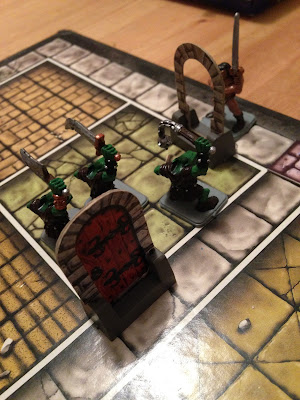 Grimgold has used the delay to catch up with Humuncules.
An orc (and a trap) guards the approach to the large central room. The heroes are sure the last chest must be in there. Humucules falls into the pit trap, but successfully defends himself from the orc whilst he is down in the filthy pit. He then kills the orc, thrusting upwards with a sure strike.
Grimgold refuses to jump the pit, or even try to disarm it, considering that if he fails he would lose his last BP.
Meanwhile the wizard has also escaped to the stairwell with his treasure chest. 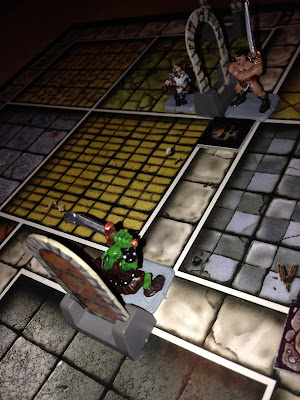 The centre room is revealed; a hulking chaos warrior named Gulthor, along with three minions. This could be too much even for the barbarian, who will probably be without help from the dwarf or anybody else.
Humuncules attacks an orc first, rolling 3 skulls and killing it quickly. The other 3 monsters close in for the kill however, Gulthor and the Fimir each taking 1BP from Humuncules (who is now down to 3BP). He needs to roll very well to survive, and when he kills the other orc its good progress. In the midst of his battle rage however, he forgets to fall back behind the door where only one monster at a time could attack him. This could be a fatal mistake.
The Fimir misses his attack but Gulthor rolls 3 skulls.....Humuncules could die from this....but rolls 1 shield and clings to life with 1BP. He has no healing potion or spells. The Fimir is killed in a flurry of blows in the barbarians next attack. Humuncules could now retreat but that is not how a barbarian behaves, so he stands his ground. 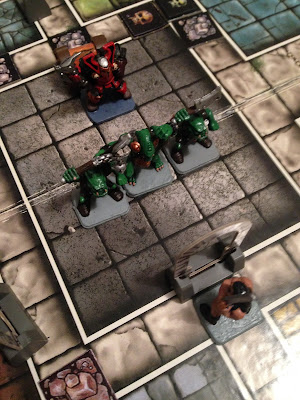 Gulthor then rolls 4 skulls in his next attack! The brave but foolish Humuncules dies. It's the first hero death of the campaign.
Here's a close up of the mighty Gulthor. I believe its a Battle Masters warrior, a game which was released around the same time as Heroquest. I found it in a hobby store, it had a damaged axe (which I repaired using bits lying around). Gulthor has the same stats as a normal Chaos warrior, which in my rules have 2 body points (which is in between UK and US rules, 1 & 3 BP respectively). 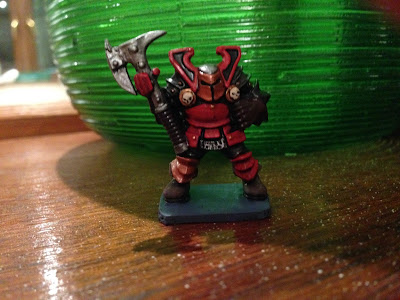 A humourous moment follows when Gulthor then decides that one hero kill isn't enough to satisfy his bloodlust, and he goes for the dwarf. He even jumps the pit trap to get to him. Grimgold flees from the hulking beast, eventually outpacing him and reaching the safety of the stairway, after a few scares and a few laughs.
Gulthor the Great may return in a subsequent quest, meaning the heroes will have to face him again. This kind of thing, a surviving recurring villains, is what makes Heroquest so great. 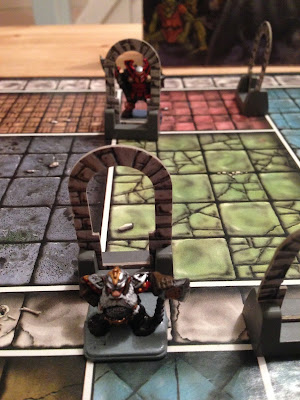 And so the quest is over. Splitting up the treasure chests worked really well. Prince Magnus will perhaps not be pleased that only two out of 3 chests were recovered.
Mentor will probably also be having words with the Heroes over their continued inability to work well together. He'll also be looking for a new barbarian!