"You have been rotting in Ulag's Dungeon ever since you were captured at the Outpost at the Mountain's base. You have not seen your fearless leader, Sir Ragnar, since you were captured. Hopefully he is still alive and is being held captive somewhere else. Finally, an opportunity has presented itself; the lone orc guarding your prison cage has fallen asleep just within reach...."
Mentor


This quest was designed by Sjeng http://forum.yeoldeinn.com/viewtopic.php?f=158&t=1593, although I have given it a few tweaks.

Sarymoor, Sneeks and Garmin are in a prison cage. They are down to 4 body points each due to neglect, and have been stripped of all their weapons, armour and gold. They defend with 2 dice but attack with only one (basically using their fists).
Sneeks cleverly pickpockets the sleeping orc guard, who stirs but doesn't wake. Sneeks uses a small key to open the cage door, but it swings open noisily and the orc starts to wake. Sneeks now has one attempt to silence the guard before he can sound the alarm. Sneeks closes the distance quickly but unfortunately for him doesn't roll a skull with his single attack die...... 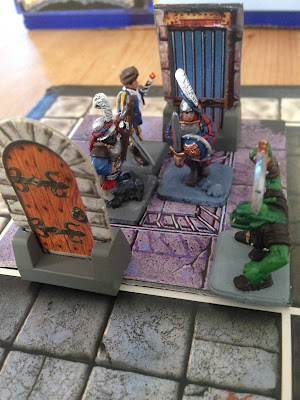 The orc bellows a warning and the door to the next room opens, revealing 2 more orcs.
Garmin charges into the new room (which has 4 doors, one on each side) and kills one of the orcs with his bare hands.
The heroes proceed to take out all the guards in both rooms, but not without cost; Sneeks has lost 1BP and Garmin 3 (down to just 1). The Heroes need to find their equipment fast. 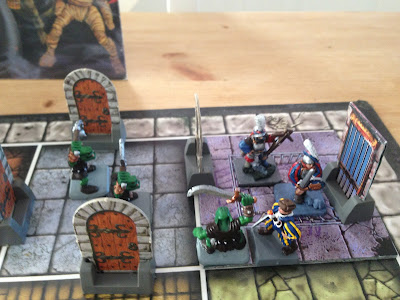 Sarymoor opens the south facing door and sees a torture rack, a Fimir, and another portcullis door. Between them, Sneeks and Sarymoor manage to bring down the big beast. Garmin is hanging back as he is seriously wounded. 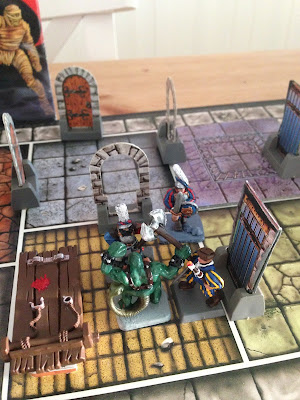 A larger iron key is found on the rack and this opens the portcullis door, revealing another prisoner. It is a wizard who appears to have been here for some time. He introduces himself as Zaphod Swiftspell. He thanks the heroes for releasing him and offers to join the party. He says "even though I am probably the greatest wizard who ever lived", that he will not be able to cast any spells until he can find his wand. That is presumably stored with the other heroes' equipment somewhere.
"Greater even than Mentor?" Garmin asks skeptically.
"Never heard of him" Zaphod replies dismissively. 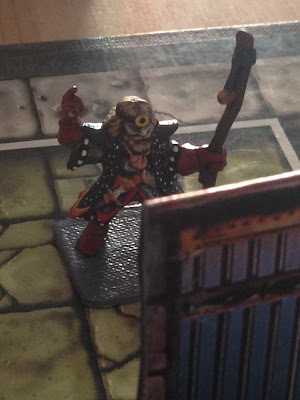 Sarymoor then tries the west room and spies their lost equipment hanging from a rack. There are 2 goblins here as well, one of which is slain by Sarymoor. Sneeks fails to kill the other goblin, but thankfully Zaphod takes it down instead, strangling it with his own beard. "Count that as revenge for keeping me cooped u like a clucking chicken! the wizard cries. The other heroes exchange glances over the odd wizard, wondering how long the strange fellow was held captive here. 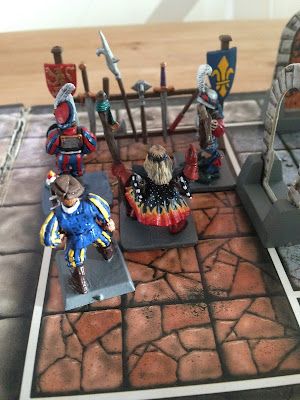 As the heroes are busy strapping on their armour and weapons, it is revealed that Zaphod knows 4 "Sorcery" spells. Only 4, but they are very powerful (see last photo for details). There are no healing or attacking spells, but they are important support spells. With 6 mind points, he will also be the keeper of most of the spell scrolls that are found. For this quest Zaphod was played by myself (Morcar). I didn't search for traps or secret doors, allowing the others to do that instead. Zaphod will become a recurring character if he survives this quest, gaining access to more spells and exotic abilities.
Sarymoor finds a treasure horde in the same room, 100 gold coins that will be very useful if they ever escape Ulag's dungeon.
After limping around the top corridor they head down and open up a room with an orc and a cupboard. Sarymoor shoots the orc plumb in the forehead, then lovingly pats his crossbow as if he has missed it intensely. There are 2 healing potions in the cupboard and Garmin uses one to heal himself back up to his standard 5 BP. 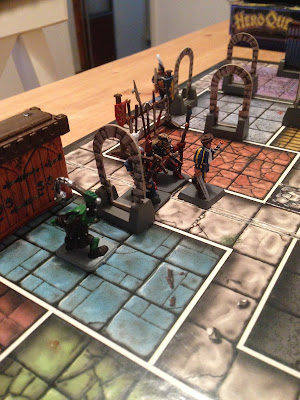 Sneeks disarms two traps out in the corridor as they move down around the centre room. Sarymoor opens the door to a green coloured room that is well stocked with greenskins (I forgot to get a photo of this room). He eyes an orc as the greatest threat and fells it with his crossbow, then calmly draws his dagger ready for the inevitable attack from the goblins. He rolls one white shield but it is not enough to save him from losing 1BP (down to 3).
Zaphod then casts Enchant Weapons and moves to stand next to Sarymoor. This spell gives any adjacent hero 1 extra combat die in attack. It is potentially very powerful as it stays active until a hero is killed.
Sarymoor uses his now enchanted dagger to kill a goblin, then steps aside to let the more powerful Garmin through. Garmin soon clears the room, chopping left and right with his broadsword.
Zaphod finds 50 gold on the table, whilst Sneeks has wandered off on his own to scout out the southern passages.
Sarymoor opens another door to find an orc and a fimir stoking a hot forge with pokers used to torture prisoners. Sarymoor shoots the Fimir dead, whilst Garmin makes short work of the orc. "These beasts won't be torturing anyone today", he says, wiping his sword clean. 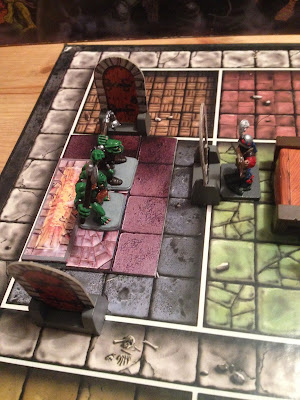 Sarymoor finds a treasure chest protected by 2 traps. He triggers a pit trap and falls in. There appears to be no way to get to the chest without a toolkit, so they holler to Sneeks to come and help. After disarming the other pit trap, Sneeks collects a dagger and a potion of healing from the chest for his troubles. 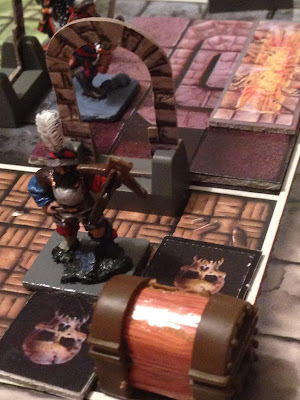 A close up of Zaphod Swiftspell (the model comes from the Advanced Heroquest game, which is also OOP). 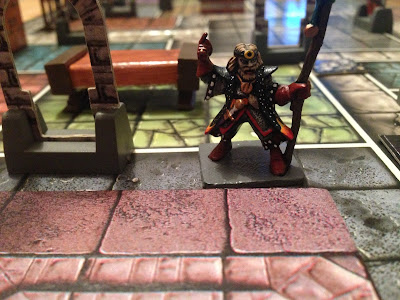 Next the heroes enter a small room with two orcs. They are swiftly dealt with by the Sarymoor/Garmin killer duo. 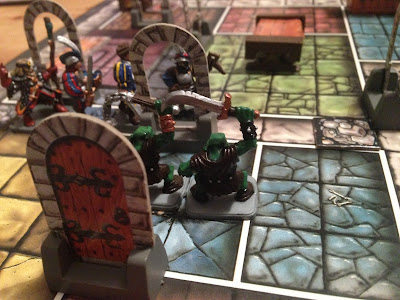 Sneeks reveals a room with three orcs and a trapdoor in the middle. This intrigues the players no end, as it is something that they haven't seen before.
The orcs charge but the heroes defend well and lose no health. Sneeks then slays one orc with his shortsword, Sarymoor kills another with his dagger (enchanted again as he is stood next to Zaphod), and Garmin finishes the 3rd. They all then enter the trap door... 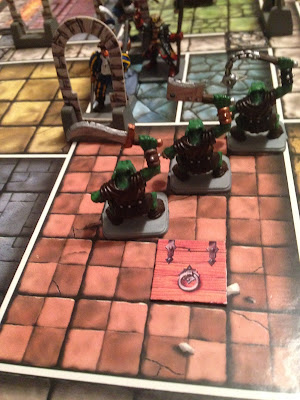 ....which turns out to be a bit of an anticlimax as they emerge into another room using a second trap door, and locate a secret door that just leads to a corridor already explored by Sneeks earlier.
The heroes now have a choice to open the door to the centre room or go south towards the bottom corridor. Sneeks was too wary to open that door earlier when he was on his own, and even as a group they are still too nervous to chance it. They are of the belief (unfounded as it happens) that Ulag is in there with his whole army, and they have still not recovered from their experience with him in the previous quest. I treacherously hint that Sir Ragnar might be in there in need of rescue, but they see through my lie and move down the corridor instead. 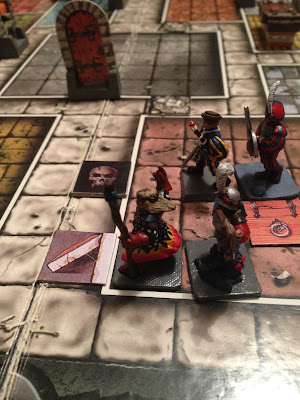 Zaphod finds a lone orc in the bottom corridor and casts Psychedelic flash on it, rendering it unable to fight effectively on its next turn. Sarymoor then shoots it dead.
Sneeks then locates a stairway in the bottom-right room. This is the exit from the quest, a route back up and out of the mountain from where the heroes can reach a safe haven. In truth they were never really in any trouble apart from when Garmin went down to 1BP before they could find their equipment (and the healing potions). 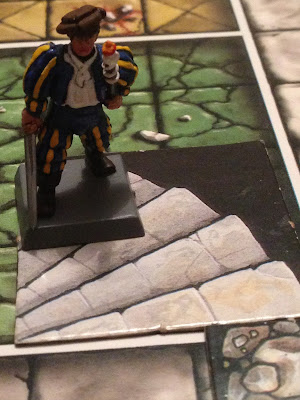 Here's a close up of Zaphod Swiftspells small but effective spell deck. These spells were created by Ethica.
http://english.yeoldeinn.com/cards.php
(I just combined a selection his Sorcery spells and Illusion spells together into one deck and called it Sorcery spells. There are 10 spells altogether in my deck and these will be for maverick wizards who are not taught in the Imperial school with its usual elemental spells. 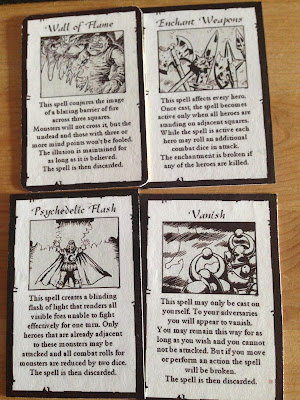 So the companions live to fight another day. And as for Sir Ragnar? The other heroes; dwarf, elf, wizard and barbarian are currently on route after receiving an urgent message from Mentor concerning the rescue of the Empires greteast knight....