Quest 3 - Outpost at the Mountain Base


"The foot of the Black Mountains north of Blackwater have long been a strategic point for those who desire control of the charcoal peaks. Chaos has decided to gain some footing by constructing an outpost here.
Sir Ragnar, you are to gather your companions and claim this base in the name of your Emperor. Be wary, good knight, for a vicious orc warlord, Ulag, maintains this outpost. His minions will fight tooth and nail to keep it. Be strong, fight with valour, return safe".
Mentor

Enter our new heroes; they have begun the quest through an iron door in the base of the mountain. Sir Ragnar is at the front, followed by Sneeks, Sarymoor and Garmin. Rumours are that this place is packed full of greenskins, so the heroes know how difficult it will be to claim the outpost for the Emperor. 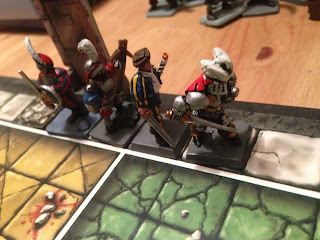 Ragnar rounds the first corner and sees two goblin archers guarding the long corridor. Fearing that there might be traps in between him and the goblins, Ragnar calls for help from his marksman, Sarymoor. The crossbowman duly steps up and skewers the closest goblin with a nice shot.
The second goblin misses his shot and on the next round Sarymoor kills that one too. The other heroes have been waiting sensibly for the corridor to be cleared before advancing. 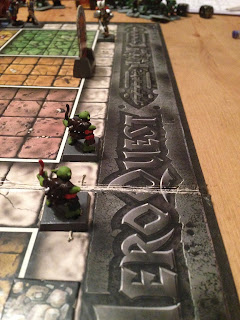 Sneeks easily disarms two traps in the corridor, allowing Sir Ragnar to enter a room with 2 more goblins and a weapons rack. The knight slays one, Sarymoor shoots the other through the doorway. The heroes are working well together like a team of pro's, moving like a well-greased machine.
Ragnar finds an old battle axe on the rack. It will allow him to attack with 4 combat dice, but unbeknownst to him it is not long long for this world and will only last for 4 attacks before it breaks and becomes useless. In the same room Garmin the swordsman, who has yet to see action in this quest, triggers a trap whilst searching for treasure and loses one body point. 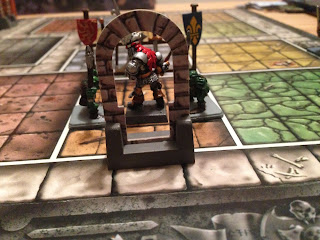 Sarymoor rounds another corner and shoots another goblin archer dead. He's proven his worth already in this quest.
There then follows a long series of passageways, full of traps which are all disarmed by Sneeks without incident. Only goblins have been encountered so far. "I thought this was supposed to be an Orc stronghold?" Sarymoor says. Ragnar warns his men to stay alert. 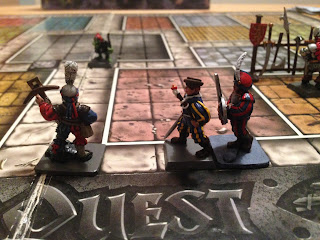 Right on cue, a Fimir pops up from its hiding place around the corner, and Ragnar steps right into it. He rolls no skulls with his attack with the battleaxe, as if he was surprised by the monster. The Fimir rolls 2 skulls in attack but both are defended by the knight in his heavy plate armour. Ragnar then makes no mistake and kills the Fimir in his next attack. 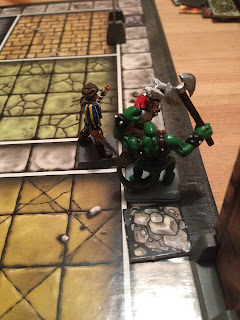 The heroes enter the room in the top-right corner of the dungeon, and get their first dose of orcs. A big brawl developes. Sarymoor and Ragnar kill one orc each, but Sneeks fluffs his attack on the goblin. Garmin finishes it off however, his first kill of the quest.
Sneeks pockets 50 gold found on one of the corpses, then they all step out into the top corridor. At the junction they meet two more orcs, one of which rolls two skulls on his attack against Ragnar. The knight rolls 4 white shields in his defence, proving to be quite the warrior!The other orc fares little better, and Ragnar fells them both without the other heroes having to get involved. 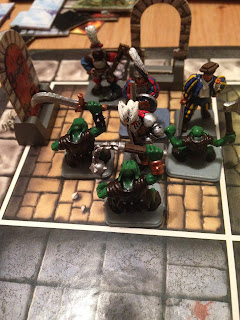 The heroes are now running into greater numbers of the enemy, in the corridor above the centre room, and in the rooms off to the sides. They steel themselves for a tough fight. Sarymoor shoots a goblin in the blue-coloured room and Sir Ragnar demolishes the Fimir with one attack. However, his battle axe shatters in the process and has to be discarded.
On Morcars turn the two orcs in the corridor attack Garmin from each side but he skillfully defends himself. The remaining goblin in the blue room squeals in terror and attacks Sarmoor in the doorway, thinking he will be an easier opponent than the knight. It has no such luck, and it too dies screaming.
Garmin despatches the other two orcs, and then the whole party combine to clear out the room to the right without loss. 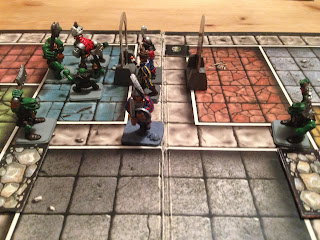 Garmin enters another room via a concealed door and searches an old bookcase. He finds two spell scrolls (the fire spells Courage and Ball of flame). To use a spell scroll a hero must roll the same or less than his current mind point total on one die. This counts as an action, so failure has a consequence (although the scroll can be kept for a future turn if the attempt to activate it is failed). I have introduced this rule to give more of a role for mind points, which are woefully underused in Heroquest. 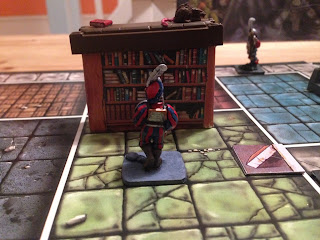 Sir Ragnar disturbs a goblin banquet. The Heroes clear out the goblins but Ragnar is wounded slightly and loses 1 BP. 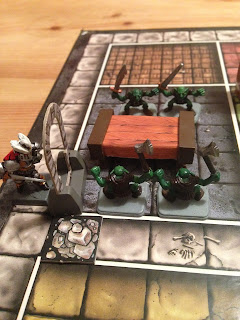 After a long walk around the bottom-left corner of the dungeon they enter this room. Garmin attempts to use his Ball of flame scroll on the Fimir, hoping to kill it in one go, but he fails his roll to activate it. Sarymoor shoots the goblin by the left wall, Sneeks kills another, and as usual Ragnar goes for the biggest baddy, causing one wound on the Fimir. The monsters fare badly in their own attacks, and are then cut down in short order. 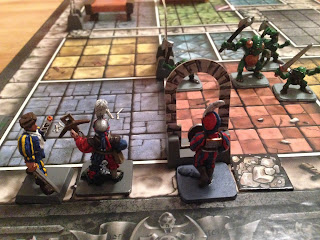 Two orcs were warming themselves by the fire from the cold of the mountains. Ragnar stomps in and kills one, and the other orcs attack clangs off his heavy armour. Sarymoor then fires an arrow into its chest and it falls back into the fire for a painful death. The heroes are starting to believe that they can clear an entire base of greenskins, against the odds. They are indeed rolling very well. 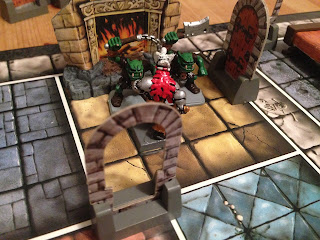 The heroes now march down an odd corridor towards the centre room. Odd in the sense that there is an open doorway in the corridor itself, separating it into two halves. Sneeks takes point position as usual, clearing the area of traps. 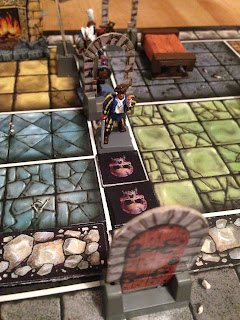 Garmin opens the door to the centre room and....holy heck, thats a lot of monster muscle. Ulag's main force is gathered in there - 4 chaos warriors, 4 orcs, 3 goblins and the beastly looking Ulag himself. The heroes confidence from a minute ago starts to evaporate.
Garmin is unwilling to charge in with so many monsters in there. He attempts to use the Courage scroll on himself and this time he's successful. Its a very useful scroll to have in these circumstances.
Sarymoor, yet to lose a BP in the entire quest so far, confidently strides into the room and fires his crossbow at a chaos warrior. He watches in horror as the bolt simply skips of the warriors chaos armour for no damage. Oh dear. 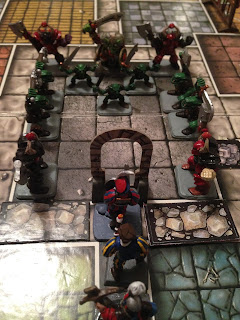 The heroes call on Ragnar, he begins his charge into the monster-filled room but then something unexpected happens; a portcullis gate clatters down where the open doorway was. The way back is blocked, no retreat is now possible and the heroes will have to defeat the entire horde.
On Morcar's turn the two chaos warriors closest to the door attack Sarymoor. He defends for his life and "only" loses 2BP (down to 3). 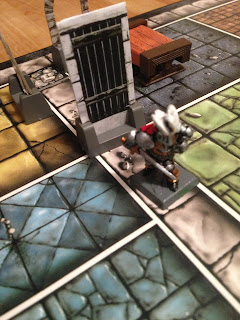 Here's a close up of the orc warlord, Ulag. 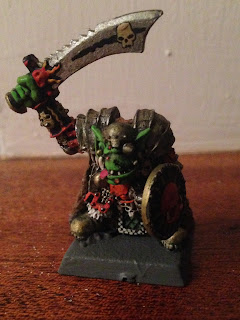 Now full of courage, Garmin charges into the room....and falls straight into a pit trap. He is also now down to 3BP. To make matters worse, as he is down in a pit he can no longer "see" a monster and the effect of the courage spell wears off.
Ragnar roars into the room and destroys a Chaos warrior. There is some hope yet with him around. Another chaos warrior attacks the knight and he is hard pressed to hold him off. A goblin tries to poke Garmin down in the pit, but fails to harm him. 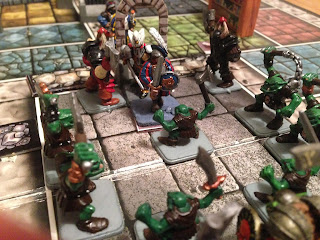 Garmin then climbs out of the pit and....walks straight into a spear trap. Ouch!
Sir Ragnar slays another chaos warrior then stands to the side, giving a field of fire to Sarymoor the crossbowman.
Here's another view of the desperate fight. Ulag seems to be hanging back, letting his minions kill the heroes. 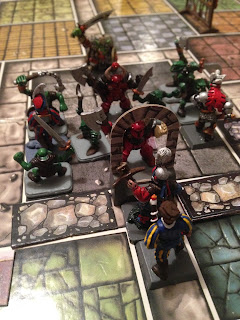 Garmin is now outmaneuvered and pinned by 3 greenskins and quickly loses his last body point from an attack from an orc. Sneeks howls in anguish at the loss of his comrade, and in his mad attack actually succeeds in wounding a chaos warrior.
Ragnar slays an orc, but he is now surrounded and loses 3BP (down to 2). The heroes now think that they should have stayed in the corridor and waited for the horde to attack them one by one. How the fortunes of a quest can quickly change! 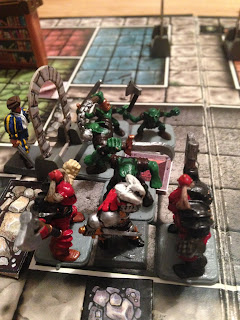 The brave knight kills a 3rd chaos warrior and Sneeks slays an orc. However, the last chaos warrior rolls four skulls in his next attack and Sir Ragnar too falls!
The picture below shows the last stand of the heroes, with Ulag giving orders to his remaining monsters to capture them. As Sneeks and Sarymoor lose their last body points, Morcar reveals that none of the heroes are actually dead, just unconscious. 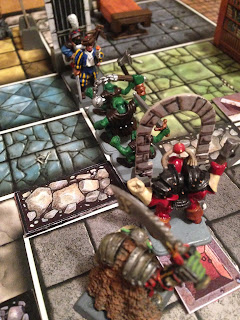 The limp bodies of the heroes are dragged off to unknown locations and the quest is over.

Overall a good solid quest. It is a bit long and most of the board is used which slows it down a lot, considering that all of the good stuff occurs in the final room anyway. If I play it again I'll cut out a corridor or two and also give the goblins in the final room some shortbows; this will force the heroes into the room if they decide to wimp out and not try to go toe-to-toe with Ulag's horde.

We will discover the fate of the captured heroes in the next quests....